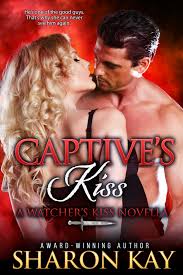 I was really happy to get the opportunity to read this novella and have the chance to see the world and the characters again… though I particularly liked being able to see another group of Watchers.

I thought it was particularly interesting to see something of the culture of the Lash demons, though I was a bit confused about how everything worked with them going into heat… or that’s what it seemed like, anyway. While there was an element of love at first sight, I really liked the relationship that grew between Saige and Tanner and it was good to learn bits and pieces of Saige’s past… though I was a bit disappointed not to learn very much of Tanner’s past.

I found Saige really easy to empathise with and I felt a lot of sympathy for her as I got to know more about her history and what she was forced to do. While I would have liked to see more depth to the villains, instead of a group of bad guys, I thought that the hints of mystery with the disappeared demons a really interesting one. It was really good to see that Tanner wasn’t willing to let things go and just assume that Saige was acting of her own volition.

While the threat in this book wasn’t as worldwide as some of the others, there was real danger that made me care about the characters and the situation. I’d definitely like to see more of the world and the characters in the future.