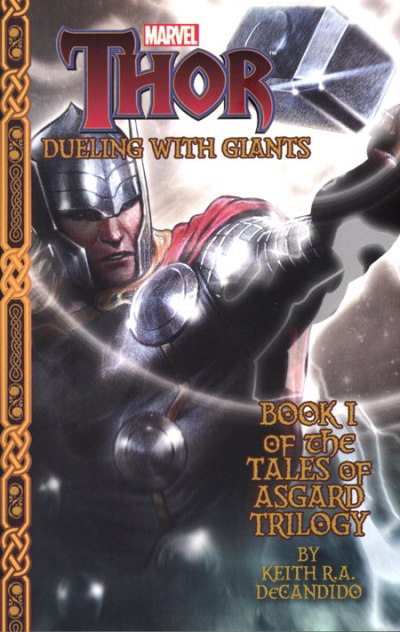 (I received a free copy of this book, through NetGalley, in exchange for a review).

While Thor has been a long-time favourite of mine since the movie, I didn’t feel that this book was as good as the blurb had implied.

I liked the opportunity to see something of Thor and Loki as children, though it was a bit sad to see how early on Loki’s resentment of Thor began… though to be honest, I didn’t feel that Thor acted very brotherly towards Loki. While they referred to each other as such, I didn’t feel that there was much sincerity on either side.

While it was good to have the opportunity to learn more about Frigga’s background, I felt there was too much summarising of the history between the characters. Volstagg’s defeat of the trolls towards the beginning made me laugh… and it provided some good relieving of tension.

I really liked the fact that, although the book was based on Marvel’s Thor, there was a lot involving the world tree and different Norse myths, though I didn’t really feel like Loki came across as a very complex villain. I was a bit disappointed not to see more of his plans and that he only played a very small part in the whole thing. Plus, I felt that his resentment of Thor was just that… without any of the complexities in being raised as a brother to someone. I did feel the movies did a good job in showing that complicated relationship between them.

I did really like seeing Frigga acting capably and being able to defend herself. I enjoyed seeing her work her magic in an offensive way… but I was disappointed that Gudrun didn’t play a big part in that, either, and there seemed to be an element of ‘the woman stays at home with the children’ in the narration.

I did especially like seeing the final short story and something of how Sif began training to be a warrior. I liked that Thor was one of the only ones who wanted to accept her… and I especially liked how gracious Fandral ended up being. I would have liked to see this book expanded upon and less information dumping, but it was entertaining to read.