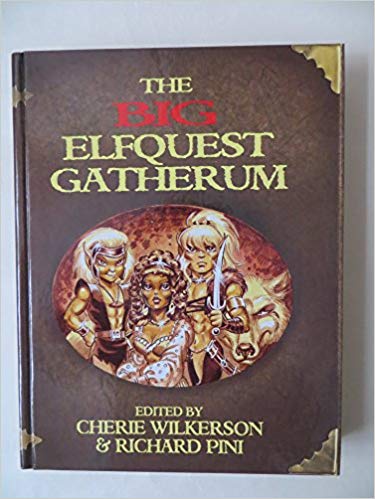 I’d give this book 3.5 stars out of 5. I remember that, when I initially bought it, the cover was one that really piqued my attention. And while I did find it interesting to be able to see and learn more about the world of ElfQuest, I actually found it wasn’t quite as informative as I was hoping.

My favourite part of this book was definitely the artwork. Even though it was in black and white, it was really obvious how much work Wendy Pini had put into the characters and scenery of ElfQuest. And another thing I really liked was the ability to see the contrast between another artist’s version of Cutter and how obviously different his creator drew him.

While the interviews did work to offer a bit more of an insight into the inner workings of Wendy and Richard Pini, I did find them to be something of a slog and quite repetitive in parts, though that could be said for quite a lot of the book. I lost count of how many times I read about the first failed attempt at getting ElfQuest made into a movie.

I was a bit disappointed in the article about the women of ElfQuest, as about half of it barely even touched on the subject. I wasn’t really left with any more information by the time I reached its end.

While I did find the article about the research to be quite interesting, I also found that to be a bit of a slog, as it was really nothing more than a list of books I ended up finding difficult to remember.

I really liked the article about the art of ElfQuest and being able to see some of the effects for myself, such as the white on black for an inverted effect; and the reflection of Cutter and Leetah in Rayek’s eyes.

It was nice to see some of the more realistic aspects of Wendy’s art, such as the drawings from the Beauty and the Beast graphic novel, which triggered an interest in seeking that out. I also found it really interesting to see the issues that there were in trying to get ElfQuest made into an animated series and I would hope the entertainment industry has come far enough by now that those issues no longer exist.

I don’t think I’d read this book again, as I did find it quite boring in parts. But it definitely triggered an interest in seeking out the ElfQuest graphic novels and more of the comics than those I’ve read already.