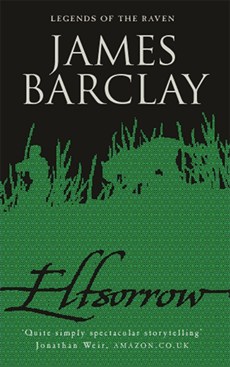 The Raven books are among those that have a huge amount of familiarity to me – to the point that, when I’m reading one, it’s like I’m seeing friends again. But out of all of the books in the series, this one is probably the hardest for me to read.

This book has a lot of what I love about the Raven and about these books in particular. While characters don’t die for the sake of it, one of the main things that’s really powerful about this series (in my opinion) is that the ‘good guys’ are not always guaranteed to win. And even when they do, it doesn’t mean that everything’s all sunshine and roses.

Ilkar and Hirad are my favourite characters and this book is really good at showing the relationship not only between them, but also between the rest of the members of the Raven. There’s a reason the group have such a strong reputation and I loved seeing the bonds of loyalty and friendship between them. And if I could ever hear Hirad’s, “Raven! Raven with me!” out loud in person, it would give me goosebumps.

I really liked being able to see more depth to Ilkar in particular. As he’s an elf and fairly long-lived, it wasn’t very clear what his life had been like before joining the Raven, apart from small pieces of information gleaned. I also really liked the opportunity to see more of the elven kind as a whole and also to see the different societies within them. It was nice to get the opportunity to see through some of the other characters’ eyes, as it allowed for the so-called villains to be given more depth, rather than just responsible for potential genocide.

I really liked the fact that magic wasn’t really used as a crutch, or a solve-all. And I couldn’t help but feel for Erienne, Denser and Thraun…each one wrestling with their own demons and having to learn (or re-learn) to rely on their closest friends and allies. The Raven is a lot more than just a band of mercenaries and I felt that came across really well in this book.

This book was difficult to read, but the characters are ones I cared about and the storyline is fraught with so much tension, it was nigh-on impossible to put down. I would absolutely love it if there were more than just the seven books I currently have in the Raven series.