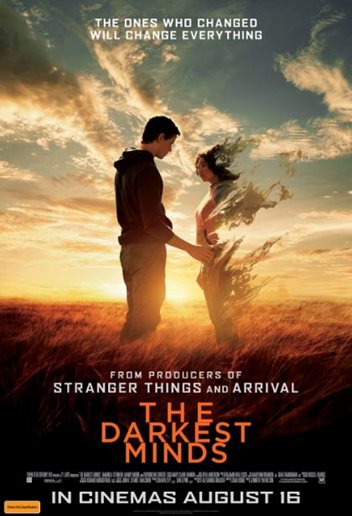 I liked the idea behind this storyline and I would have liked a bit more information about the background. The virus was such an important part of the present-day setting of the world, but I didn’t really get the idea that the virus had been such a huge event. While Ruby talked about the amount of children who had died, that didn’t feel particularly real to me as a viewer.

I haven’t read the book this movie is based on, so I can’t really speak to how accurately the movie followed the plot. I did like Ruby as a character, but her lack of knowledge about her abilities didn’t really fit in with the way she used them.

It was good that this movie focused a lot on the relationships between Ruby, Liam, Zu and Chubs, but I felt that a lot of the background information just fell by the wayside. When it came to the colours, there was too much telling rather than showing. And I would have liked a bit more information about how the Green abilities worked, considering there were times Chubs’ eyes glowed and times they didn’t, despite it being clear he was using his abilities then.

I liked the fact that there were more adult issues in this movie, such as segregation and the issue of consent. I did like Ruby and Liam’s relationship. I thought that it grew and evolved naturally and it was also nice to see Zu interacting with them. I would have liked to see more of both hers and Chubs’ pasts…and I thought it was sad how she had to keep her gloves on due to her abilities.

The movie wasn’t really clear on who the bad guys were meant to be. And while it could have been trying to show that neither side was good or bad, it didn’t really give much information or background at all. And a lot of the other characters didn’t have nearly as much depth to them.

I’d be interested in reading the book and finding out more information about the world, but as it stands, I didn’t really feel like this movie had a lot to make it stand out from the rest of the crowd. And while it did set itself up for a sequel, I didn’t have enough emotional stake in the over-arcing storyline to rush to watch more movies in the franchise.