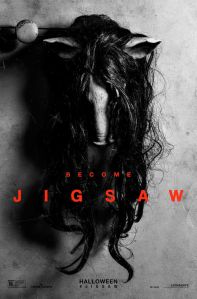 I’ll preface this review by saying this is the first movie in the Saw franchise I’ve seen. I wouldn’t have seen this one, except the trailer was engaging enough to make me want to watch it.

Okay, so I had very mixed feelings by the time this movie finished. I do know the basic concept of the franchise, so I knew what to expect.

The scene at the start did a good job of drawing me into the movie, even though the more I learned about the ‘victim’, the less sympathy I had for him.

The scenes interspersed with the games Jigsaw’s victims were forced to play were quite enlightening, more so when I found out more about them. Of course, the more I learned about them, the less I cared about their fates. Really, only Anna seemed to care at all about something other than her own life. And then what I learned of her was completely at odds with what I’d seen of her while held captive. To make it more believable, there should have been more of an evolution of character shown outside of the games.

On the police side of things, there seemed to be more just standing around saying, ‘this is impossible,’ until towards the end. Apart from Logan and Eleanor, I didn’t feel the individual police officers had a whole lot of depth to them. And Eleanor didn’t really seem to have much substance outside of her fascination with Jigsaw.

The movie was particularly gruesome throughout and definitely deserved its 18 rating. It was good to see how things began coming together, but I didn’t really feel like there were many chances for jigsaw’s victims.

I did think that the movie was very cleverly done and it did resonate with me. I actually found Jigsaw to be more sympathetic than I was expecting; and this movie did trigger an interest in watching the other movies in the franchise at some point in the future. It seemed to blur some lines morally and that was very interesting to see.