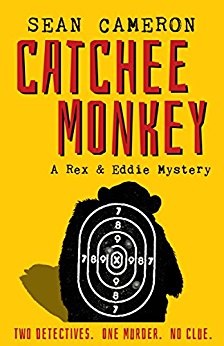 I did find this book to be a really quick and easy read, even though I do have to say I got really irritated with Rex at times. I honestly couldn’t figure out how Eddie kept putting up with him.

I didn’t really find much humour in this book, personally. The two main characters, while fairly likable, were still very incompetent. And eventually, that incompetence became irritating rather than cute.

Probably the best part of this book was the interaction between Eddie and Rex. While there was little in the way of laugh out loud moments, the litany of failed jobs was somewhat amusing to read, if also somewhat depressing.

While there were some good moments of action and detective work in this book, I felt there wasn’t really enough of a plot to keep me fully engaged.

Out of the characters in this book, it was only Eddie and Rex who seemed to have much depth to them. I didn’t think much of Eddie’s ex-girlfriend; she really didn’t seem to have a life outside of his interactions with her. I would say the same was true of the rest of the secondary characters. They only appeared when it was convenient to the plot and therefore, they didn’t feel real enough. The same was true of Rex’s mother, who made no actual appearance in the book, even though she was referenced.

All in all, this book could have been done a lot better. The two main characters had me continually rolling my eyes, but they were arguably the best thing about this book. I kind of kept forgetting about what they were actually doing in this book, as the two of them didn’t really seem to know what they were doing.

If there’d been less information dumping and more time spent on developing the secondary characters, I would have enjoyed this book a lot more. As it was, the book was still easy to read…but it hasn’t particularly stuck in my mind. While the ending worked especially well, I don’t plan to read the next book/s in this series; at least not any time soon. The book could have been longer with secondary characters who had more life to them.