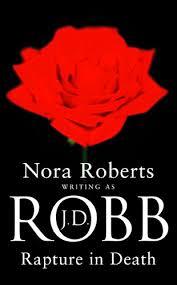 I’ve always enjoyed reading books by this author and this one was no exception.

I really like Eve Dallas’ character and I especially enjoyed seeing her relationship with Rourke. While I did think there was a bit too much summarising of past events, it was good to see bits and pieces of her past. And I thought there were some really good moments between her and the other characters. It was good to see her interactions with Peabody and there were a few scenes I found myself smiling at their exchanges.

I really liked seeing the setting of the world and how it imagined the future to look like, especially with the use of the droids and the fact that coffee was a shortage.

The thriller type aspect of this book was really creepy even from the start, but I felt that it was spoiled somewhat by the constant switching in POVs. I would have liked to see the book entirely from Eve’s perspective, rather than have it switch over to provide some red herrings.

Right from the start, it was good to see something of how Eve relaxed, if one could term it that. And it was good to see the mixture of science fiction with the murder aspect. And I especially liked that both Eve and Rourke still seemed to have hangups, even though they were clearly happy and very much in love.

I did think there were times when Eve’s actions contradicted each other. That wouldn’t have been such a bad thing, but I wasn’t sure exactly where she drew the line.

I also liked that, along with trying to solve the murders, it felt like there was a lot more going on personally with the characters. I have to be honest, though, and say that Mavis annoyed me a bit by the end of the book. I felt like she was a bit over-the-top and didn’t really seem that sincere.

I did feel like there were a few instances of telling rather than showing when it came to relationships between Eve and some of the other characters. But this book did draw me in and kept me reading throughout. I enjoyed the world and getting to know the characters and I would definitely be interested in reading more books in this series in the future.