In The Hand of The Goddess 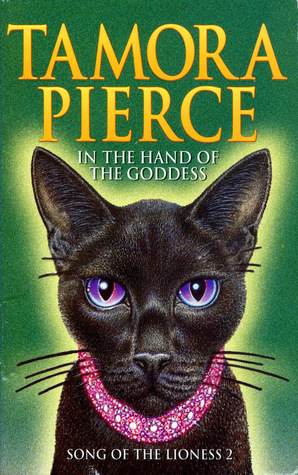 I’d give this book 3.5 stars out of 5. As I recall, I liked the first one a whole lot…but this second book kind of strayed away from Alanna’s desire to be a knight and focused far more on forcing a love triangle. While I did enjoy seeing her interactions with the other characters, especially Jonathan and George, I would have preferred the friendship building to forcing romance.

It was interesting to see something of Roger’s machinations, but because the book switched between POVs, there wasn’t really much in the way of surprises. And some of the more minor characters seemed to get left by the wayside.

One of the main things I liked about this book (and the first one) was that the role of a knight clearly wasn’t glamorous or easy. While Alanna was skilled in fighting, it was because of the long training she’d had. And it was clear her stubborn nature didn’t do her many favours.

I really liked the fact Alanna got a cat and it was amusing to see the two of them communicate human to feline. I also enjoyed seeing Alanna interacting with some of the other soldiers, though I felt there were a few too many secondary characters that weren’t really developed.

I did also feel like passages of time were glossed over. The book wasn’t really long enough to span a couple of years and I didn’t think nearly enough growth was shown for any of the characters, not just Alanna. I would have liked to see a bit more detail about Alex, especially as he, like some of the other characters, were lost by the end of the book.

I felt this book could have done with being longer and more expanded upon. It was nice to see how Alanna’s brother, Thom, had changed and grown, but seeing his maturity only seemed to hit home how little Alanna had changed. And with her constant protestations about not wanting to fall in love and be beholden to any man, I felt like the book became more about that and less about her dream of becoming a knight.

I thoroughly enjoyed reading this book and the others as a child, but re-reading it now as an adult, I recognised there were parts of the story that weren’t as strong.