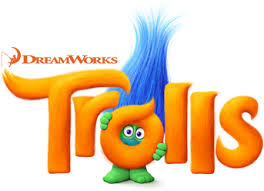 I remember, from an early age, that my sister used to enjoy collecting trolls. They were a big part of our growing up… so I was immediately interested in watching this movie with both my sister and my niece.

Even though this movie was universal, I actually did feel it had some darker scenes that wouldn’t be suitable for very young children. I did like the interactions between Poppy and Branch… and it was good to see the complete contrast between the two of them.

I did have a lot of sympathy for King Gristle. Even though I felt that he wasn’t very strong for most of the movie, it was sweet to see him and Bridget interacting… and I especially liked the friendship that formed between Bridget and Poppy. Plus, it was sweet to see Bridget’s love for Gristle.

I did think that the trolls were too innocent. By the end of the movie, I didn’t feel that they’d really learned a lot… even though the ending was good and I thought it was interesting to see the different types of trolls there were. And I did really like the scrapbooks Poppy kept making, even if she did very clearly lack the ability to take anything seriously.

I thought there were some really good songs in this movie that fit really well. My favourite was probably ‘Get Back Up Again’, which was a really nice, visual song.

There were some very reognisable voice actors in this and although I really didn’t like the Chef, I did think she added a good dimension to the movie.

I did think the movie was engaging and there were some deeper themes to it. It was definitely good for children to watch… and as an adult, I enjoyed the visual aspects and the humour, along with the animation and the creativity in the movie.