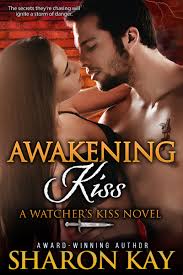 I was really happy to have the opportunity to read this latest book in the series. I couldn’t remember all of Rhys’ group from the previous books, but it was nice to see him interacting with Enza… and I liked that this book was longer, which made me more engaged with the romance and the storyline.

I did kind of think that Enza was putting herself in dangerous situations, but I admired that she had a lot of courage and spirit. I could, however, understand why Rhys was so suspicious of her at first… and although their attraction was fairly obvious to begin with, it was good to see that there were a lot of other things going on at the same time. And it was good to have a very clear image of Brenin in my head.

What I also liked was the opportunity to see more of the other supernatural creatures, such as the werewolves and the nymphs. It was nice to see a bit more depth to some of the nymphs and I liked that the ending involved them.

It was good there were some hints to their pasts scattered throughout this book and I found it easy to empathise with the characters. I would have liked the opportunity to see more of Enza’s interactions with her mother and grandparents, as I didn’t get a good idea of their relationship and there was a bit too much summarising in the scene that did involve them.

I liked being able to learn bits and pieces of both of their pasts as the book went on and it was also good to see something of the bond between the Watchers, even though I wasn’t sure who was who for a little while. And the part with the soccer mom and Brenin did make me roll my eyes and get irritated on his behalf.

I liked seeing the friendship between Enza and Meena and it was nice to see something of what went on in the bakery. There was a lot of action and good tension in this book and it really engaged me and kept me reading throughout. I did feel sorry for Enza, being thrown in at the deep end… but I did like her relationship with Rhys and I would definitely like to read more books in this series in the future.