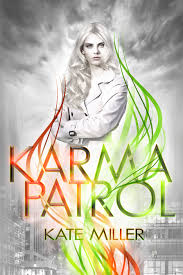 I really liked the blurb of this book and I felt the idea was a really unique one. It was good to learn about the different divisions and something of the conflicts that existed within the different members working together.

I found Jade easy to relate to and I liked that she came across as a really strong character. I could empathise with her desire to have her soulmate and how she’d saved herself for him. I liked seeing her interact with the other characters, but I would have liked to see some more of her relationship with her father and sister. I only had the chance to see one conversation she had with each of those family members.

I did like Jade’s friendship with Shannon and it was interesting to get some glimpses into the historical nature of their divisions, though I would have liked to know some more details about how things had gone wrong with the soulmate bond.

I really liked Luke and his relationship with his partner, Aaron, though I would have liked a bit more background of some of the other officers in the station. It was interesting to see how the case he was involved in connected with what was going on with Jade’s world… but I did feel that the exception to confidentiality being soulmates was a little bit weak. I would have liked to see more conflicts involved in that.

It was nice to see that there were conflicts on Luke’s side and although I did think Jade was particularly naive when it came to having a soulmate, I liked that it was obvious things weren’t as simple as love at first sight… but I did think the book did risk crossing the line into instant!love several times.

I did feel that this book carried a lot of tension and it was really easy to read. I found it engaging and a unique idea. And although there were some areas I thought it could have been improved, I would be interested in reading the next book/s in this series at some point in the near future.