Synopsis:
After seven years living as Alexandra Gastone, Milena Rokva is now free to be her true self, if only she knew who that was or had time to find out. Milena is in a race against time to bring down Perun, the very organization that trained her as a spy. Perun is no longer content to use their network of sleeper agents to protect her homeland and is maneuvered to take control of the world’s energy markets, sending the globe into chaos.
Working with her surrogate grandfather, Albert Gastone, his CIA friend Brad and her old handler, Varos, Milena finds herself embroiled in an epic spy game teamed with friends whose endgames do not necessarily align with her own. The only person Milena can truly trust is herself.

Can Milena take down Perun, protect her fellow cadets and make a life for herself with her boyfriend, Grant, as well as the friends and family she’s come to love as Alexandra Gastone? Buckle in for a wild ride as the Alexandra Gastone duology comes to a close.

Having read and enjoyed the previous book, I was quite happy to have the chance to read the sequel.

I was able to empathise with Milena really easily. I especially ached for her after everything that happened with her grandmother. I really didn’t think much of the latter by the end of the book.

I liked that there was a lot of tension in this book, both with what Milena and Albert were doing in trying to get immunity, but also in Milena’s interactions with Grant. While I could understand why Grant reacted the way he did, I felt it was very over-the-top… but it was nice to see how the two of them tried to talk and Grant tried to get to know the real Milena.

I really liked seeing Milena’s relationship with Albert. It was quite sweet to see how close they were, in spite of the deception that was prevalent through most of their relationship. I also liked seeing Milena interacting with the other characters… though I really didn’t like the tensions between her and Valos; even though it was kind of amusing to see how self-aware she was about the love triangle.

I would have liked to see more interactions between Milena and Brad, especially given what happened towards the end. I actually did feel that this book ended a bit abruptly, given everything that was happening earlier on in the book.

I liked seeing Martine in this book and it was good to see that Milena kept her wits about her. There were a few surprises in the book and I liked being able to learn a bit more about her past. I really didn’t like her father, although it was interesting to see their interactions. However, he just seemed to be a one-dimensional villain and I couldn’t really see what his motivations were, or what drove him.

I did like seeing Milena worry about the situation with the real Alexander and I liked that it added more dimension to Milena’s character. In the future, I would like to read more books by this author. 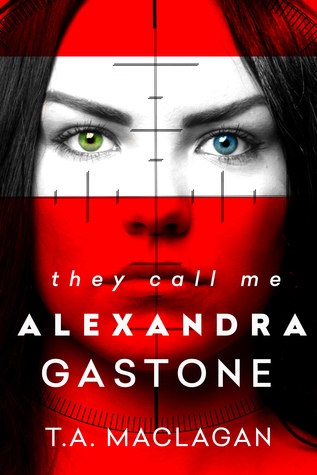 Follow the My Name is Milena Rokva by T.A. Maclagan Blog Tour and don’t miss anything! Click on the banner to see the tour schedule.

T.A. Maclagan is a Kansas girl by birth but now lives in the bush-clad hills of Wellington, New Zealand with her Kiwi husband, son and four pampered cats. With a bachelor’s degree in biology and a Ph.D. in anthropology, she’s studied poison dart frogs in the rainforests of Costa Rica, howler monkeys in Panama and the very exotic and always elusive American farmer. It was as she was writing her ‘just the facts’ dissertation that T.A. felt the call to pursue something more imaginative and discovered a passion for creative writing. They Call Me Alexandra Gastone is her first novel.