The Mystery of Hollow Places

Synopsis:
All Imogene Scott knows of her mother is the bedtime story her father told her as a child. It’s the story of how her parents met: he, a forensic pathologist, she, a mysterious woman who came to identify a body. A woman who left Imogene and her father when she was a baby, a woman who was always possessed by a powerful loneliness, a woman who many referred to as troubled waters.
When Imogene is seventeen, her father, now a famous author of medical mysteries, strikes out in the middle of the night and doesn’t come back. Neither Imogene’s stepmother nor the police know where he could’ve gone, but Imogene is convinced he’s looking for her mother. She decides to put to use the skills she’s gleaned from a lifetime of her father’s books to track down a woman she’s never known, in order to find him and, perhaps, the answer to the question she’s carried with her for her entire life.
Rebecca Podos’ debut is a powerful, affecting story of the pieces of ourselves that remain mysteries even to us – the desperate search through empty spaces for something to hold on to.

I thought this book was a really intriguing read. Imogene was a character I was able to empathise really strongly with… and although I did get confused with some of the sudden flashbacks, for the most part, I was able to follow the storyline.

It was good that the plot started straight away and I was able to see how Imogene viewed her father and what her relationship with her stepmother was like straight away. Although a part of me did feel for how Lindy must have viewed things, I did find Imogene a much more sympathetic character. In some ways, I thought Lindy fluctuated a bit between trying too hard and treating Imogene like a child. (Though Imogene’s musings on Lindy’s comments about her first words was really amusing).

I liked the fact that Imogene used the books she’d read, including those written by her father, as parallels to what she was trying to do. In many ways, that helped me to connect emotionally to her as a character. Not only the fact she was reading darker books when she was really young… but how she imagined herself as the characters she’d read about.

It was good to see that there was an air of mystery through this book, but I also really liked seeing Imogene’s friendship with Jessa. While I couldn’t help thinking that Jessa seemed vastly different to Imogene, I did think that their friendship felt very real and natural… and it was good to see that Jessa did her best to support Imogene and be a good friend to her… despite the problems. However, I did have trouble seeing why Imogene had a crush on Chad. I didn’t feel that nearly enough detail was shown about him to find that really believable.

I thought it was good that there was a fairly small cast of characters. It gave the book a bit more of an ‘intimate’ feel and I felt that the writing wasn’t bogged down with me trying to keep track of who was who… only during a couple of scenes, where other characters were mentioned but I had trouble keeping them straight.

This book was quick and engaging to read. I thought Imogene was a likable, sympathetic character and I was drawn into her life really easily. In some ways, this book was a ‘growing up’ storyline… but I also liked the themes of family and friendship. In the future, I’d imagine I’d be happy to read more books by this author.

Read an excerpt of THE MYSTERY OF HOLLOW PLACES on Epic Reads:

Follow the The Mystery of Hollow Places by Rebecca Podos Blog Tour and don’t miss anything! Click on the banner to see the tour schedule.

Rebecca Podos’ debut YA novel, THE MYSTERY OF HOLLOW PLACES, is forthcoming from Balzer + Bray (HarperCollins) on 1/26/16. A graduate of the Writing, Literature and Publishing program at Emerson College where she won the M.F.A. Award for Best Thesis, her fiction has been published in Glimmer Train, Glyph, CAJE, Paper Darts, Bellows American Review, and Smokelong Quarterly. Past Awards include the Helman Award for Short Fiction, the David Dornstein Memorial Creative Writing Prize for Young Adult Writers, and the Hillerman-McGarrity Scholarship for Creative Writing. She works as a YA and MG agent at the Rees Literary Agency in Boston. 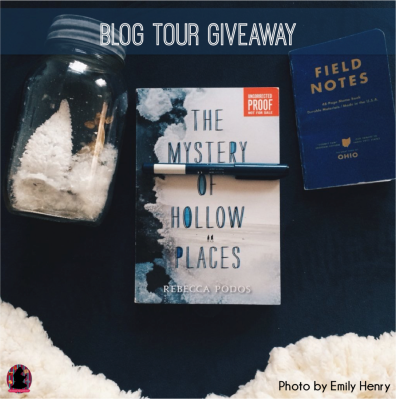 One comment on “Blog Tour: The Mystery of Hollow Places”