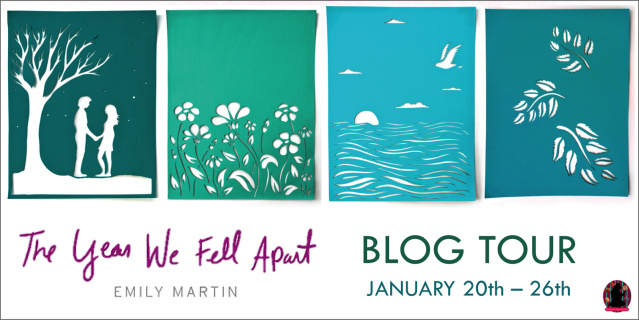 The Year We Fell Apart

Synopsis:
In the tradition of Sarah Dessen, this powerful debut novel is a compelling portrait of a young girl coping with her mother’s cancer as she figures out how to learn from—and fix—her past.
Few things come as naturally to Harper as epic mistakes. In the past year she was kicked off the swim team, earned a reputation as Carson High’s easiest hook-up, and officially became the black sheep of her family. But her worst mistake was destroying her relationship with her best friend, Declan.
Now, after two semesters of silence, Declan is home from boarding school for the summer. Everything about him is different—he’s taller, stronger…more handsome. Harper has changed, too, especially in the wake of her mom’s cancer diagnosis.
While Declan wants nothing to do with Harper, he’s still Declan, her Declan, and the only person she wants to talk to about what’s really going on. But he’s also the one person she’s lost the right to seek comfort from.
As their mutual friends and shared histories draw them together again, Harper and Declan must decide which parts of their past are still salvageable, and which parts they’ll have to let go of once and for all.
In this honest and affecting tale of friendship and first love, Emily Martin brings to vivid life the trials and struggles of high school and the ability to learn from past mistakes over the course of one steamy North Carolina summer.

While this book, again, isn’t one I would have necessarily chosen to purchase myself… I did still find it a really good read. While I wasn’t sure what to make of Harper at first, I found myself growing more sympathetic towards her as the book went on.

I would have liked some more details about how Harper, Cory and Declan had become friends in the first place, but I liked the fact that this book also dealt with family issues as well as the friendships and romantic entanglements.

It was interesting to see that Harper was forced into taking a summer class, but I found it interesting that she seemed to find something of a ‘niche’ with the photography. It was obvious right from the start that there was a lot of tension between her and Declan… but although I was confused about exactly how things had been left between them, it was good that the full story about that unfolded gradually throughout the course of the book.

I did like the fact that Harper’s character was clearly flawed. There were times I wanted to reach into the book and give her a good shake… but I did warm to her and I thought that her flaws made her a much more interesting character.

I liked Cory and I would have liked to see more of him in the book, as well as Mackenzie and Gwen. Although I was confused about certain aspects at first, it was nice to see that Harper did still have people who cared about and wanted to be there for her… to the point of telling her to call if she ever needed a ride.

I would have liked to see more of Harper’s relationship with Graham, but it was nice to see her and her mother… and also nice to see Harper forced to take some responsibility. There were a lot of really good emotional scenes in this book that drew me in and made me feel for the characters.

In the future, I would be interested in reading more books by this author. It would also be good to see more of the characters… maybe some of the minor ones as the focus, though, like Cory or Graham.

Follow the The Year We Fell Apart by Emily Martin Blog Tour and don’t miss anything! Click on the banner to see the tour schedule.

Emily Martin lives and writes in the Greater Boston area, though she will always call Michigan home. She has a penchant for impromptu dance parties, vintage clothing, and traveling to new places. When not writing, she can be found hiking New England’s peaks, searching for the perfect cup of hot chocolate, or baking something pumpkin-flavored.
Emily’s debut young adult novel, THE YEAR WE FELL APART, comes out January 26, 2016 from Simon Pulse.
Her work is represented by Lara Perkins of Andrea Brown Literary. 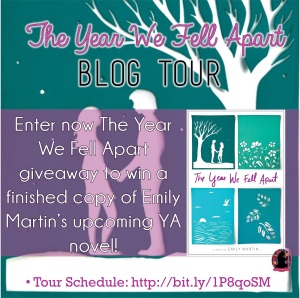