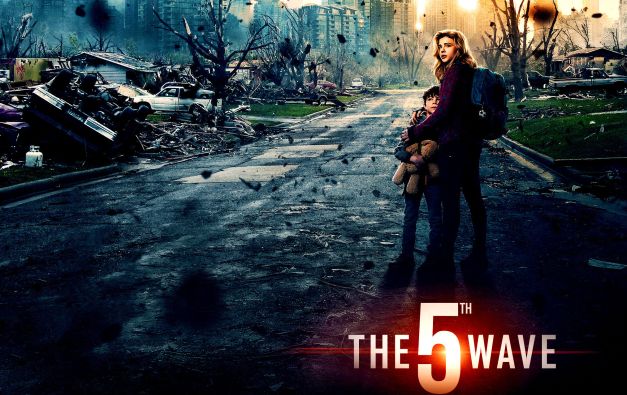 I have read the book this movie is based on, though it was a little while… but I did have some idea of what to expect, even though I got it confused with another book I’d read.

I wasn’t sure the narrative style carried so well with this movie. I did like the actors and felt that they fit what I remembered of the characters’ personalities… but I was a bit disappointed to see more of an insta!love connection between Evan and Cassie than I remembered there being in the book.

Seeing the waves as flashbacks was a bit confusing, since I had some trouble figuring out where they were. At the same time, I did think that the way the scenes were shot was particularly effective. I found it really easy to understand the devastation faced by the survivors of the waves… and how hard it was for them to trust each other.

I did like being able to see the different sides of the story and it was good to see that there were some elements of foreshadowing… and that Cassie wasn’t helpless, even though Evan’s views seemed very outdated.

I did enjoy seeing some of the interactions between Ben and the other members of his squad, but it would have been good to see more of the personalities of the other members. I did think that there was quite a bit that was left out from the book… not least the way some of the characters were changed.

While there was some violence in this movie, I felt it did fit with the feel of the movie. It was good to see Cassie interacting with her parents and brothers and there were some areas of ‘normalcy’ that worked really well, such as Cassie’s comments about her phone and the pictures of her family. (Incidentally, although Evan was a bit of a jerk for what he did, some of his exchanges with Cassie were quite amusing).

I’m hoping the sequel to the book will be made into a film as well. While I haven’t read it yet, I am interested in seeing where the characters go next.