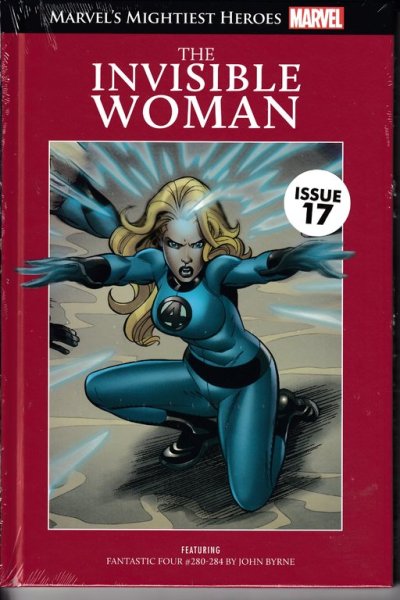 The Invisible Woman isn’t a superhero I’m new to, having seen the Fantastic Four movies, but it was interesting to see the comic book focused on her… especially given her early origins as part of the Fantastic Four.

While I did find the comics about her intriguing, it was a little disappointing to only see one of Sue’s storylines… though I did think those comics did a good job of demonstrating her abilities. It was also good to be able to see more of the other characters… such as She-Hulk.

I thought that the storyline in this set of comics was a particularly good one… if somewhat hard to read. It was a pretty awful storyline to see people so warped by hatred… and especially to see Sue twisted, although I would have liked to see more details about exactly how it had all worked.

I would have liked to see a bit more of the family aspect, particularly in regards to Sue and Reed’s relationship with their son. While I could see why they were more concerned with trying to be heroes, it seemed like Franklin was almost an afterthought.

It was nice to see Johnny’s relationship with Alicia, but I would have liked some more details about how she was unaffected by the Hate-Monger. Sue as Malice was kind of creepy… but I felt that her breaking through was a bit too easy. It was good to see how her emotions towards her family were twisted, though.

I liked seeing the Fantastic Four going into the other dimension, though it was sad to see how affected Sue had been by what had been done to her. At the same time, I was glad to see her being able to step up and show that she was intelligent as well.

I got very confused by some of the scenes, especially when a much older Reed was treating Sue badly… but it did make more sense the more I read, though I was disappointed not to see more of Ben. It was also bad to see She-Hulk brought so low… but I thought it was really cool when she was able to snap out of it.

I thought the artwork was good and there were some nice scenes that allowed me to be drawn into the setting. I would like to see more of Sue Storm in other comic books.