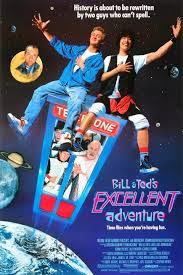 I saw this movie originally quite a long time ago and although I think it’s quite a silly affair… it is entertaining to watch, with a good atmospheric feel.

Although I did feel that Bill and Ted were very cliched characters, I did think it was good that they did have a goal to work towards. The settings weren’t exactly true to history, but despite the constant use of teenage language, I did like both of their characters.

The idea of a time traveler coming from the future to keep Bill and Ted from being separated was an interesting one and I did like how everything seemed to fit together with the time travelling. There were some good elements of foreshadowing and it was interesting to see how Bill and Ted interacted with the people from history… even if the historical figures’ reactions were far from realistic.

I did think there were some really good instances of music… though not when Bill and Ted were trying to play their instruments. I did like seeing them interacting and their friendship did feel realistic and came across well. I didn’t really think that the princesses were well-rounded characters, though.

It was interesting to have the opportunity to see the future, though it was obvious how everything connected. Rufus was an interesting character, though it would have been good to know why he couldn’t travel with Bill and Ted.

I liked seeing how the caricatures of the historical figures dealt with being in a vastly different time and it was cool to see Billy the Kid and Socrates form close friendships with Bill and Ted. Despite the personalities being grossly exaggerated, there were some elements that I thought worked particularly well.

Despite being over the top and a bit cringeworthy at times, I did find this movie really entertaining to watch. It’s not a bad way to spend a couple of hours.