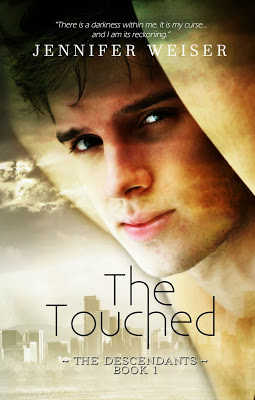 The first sixteen years of Arabella Penthallow’s life have been a lie…
In a world where deception is the key to survival, Ara has kept up the charade of being a perfect Legion Leader’s daughter. But a darkness stirs, and she discovers she is Touched, a mortal gifted by the Gods. The Touched are as rare as they are feared, and Ara is forced to leave Union City for neighboring Midnight City to protect herself and those she loves, leaving Tove Thorn, the boy who has always known her heart, behind.
Carter Decker has vowed to burn Union City to the ground…
Midnight City’s cocky, infamous bad boy always gets what he wants, and he wants Union City to pay for burning his mother alive because she was Touched. When Carter meets Ara, she is everything he’s been taught to hate. Then he learns she is Touched—just like him—he isn’t sure who he hates more…the Touched girl whose father killed his mother, or himself for being tempted by someone he’s sworn to kill.
They are told they’re fated to be soul mates…and they each wish the other never existed.
When Midnight City is attacked by Union City, Carter and Arabella will do the unthinkable…even if it means falling for the enemy. The truth lies in Arabella’s home nation, and Tove is waiting. Soul mates or not, he has an advantage Carter doesn’t, fated souls be damned.
War is coming…and Ara is the prize.

I did really like the blurb of this book when I read it the first time. Having finished reading the book, however, I do have some mixed feelings.

I would have liked some background on the Touched earlier on in the book. While the first scene did contain a lot of tension and I found it very easy to empathise with Carter as he watched his mother die, I did find it really hard to get into the storyline with the constant switching of different first person POVs and third person POV. It would have easily been four stars if it hadn’t been for that.

I did think the two different cities were interesting and I would have liked to see more of Carter’s relationship with his father, as well as with Rob. It was easy to see the friendship between Carter and Cast… but I was only told about Carter’s and his father’s connection to Rob, not shown.

It was interesting to see the different kinds of abilities, though the fact that Ara was a ‘chosen one’ was a bit worrying, given that she seemed able to outshine everyone. I did find the bonding to be an interesting concept and I was glad to see that there were doubts about whether the feelings were real or not… something I don’t see very often with soulmate romances.

I did like the relationship between Cast and Trinity better and it would have been good to see more of them interacting together. I wasn’t very keen on how many male characters were apparently in love with Ara, but I did find Tove fairly interesting in spite of that. I would have liked to see more of his character outside of obsessing over Ara.

I thought Alexis and her children were interesting and I would have liked some more details about them and what their end goals were.

While I’m curious about what will happen in book two, I probably won’t read it unless it sticks to third person or one first person POV. The constant changes did make it hard to read… which was a shame, because the plotline of the book was really intriguing, even if I would have liked the focus to be on a different character.

Arabella steps back from me and locks her gaze with mine. “Then there’s something I have to tell you,” she whispers. “But whatever I tell you, despite what you might choose to do afterward, you have to promise you remember what you just said.”

I laugh nervously before I realize she’s serious. I clear my throat and nod. Arabella returns my nod, her features becoming somber before she closes her eyes. I watch her Her features relax and a soft smile pulls at her lips. With her eyes closed she tugs my hand to hers. Warmth spreads through me with her touch. Something solid forms between our hands. Ara’s eyes spring open, peering up at me, she removes her hand and takes a step back from me.

My eyes run down my arm to my outstretched hand, where the weighted object sits. My stomach flips as my eyes adjust to the object sitting in my hand. A small, round, silver tin sits in my hand. I recognize it as the same small tin that Ara and I had used when we were kids.

A sun baked mud pie sits in on my palm. My gaze darts from it to her. She forces a weak smile.

My stomach plummets, the tin falls to the ground. Sand bursts from it and all over our shoes.

The whispers are true. Our little Arabella isn’t who she once claimed to be.

Arabella Penthallow is more than human.

A character interview with Ara:

Hi Sarah! Thanks for having me!

1) What is your most important goal?

As a first daughter to the Legions, my goals are for unity and peace. For far too long, my nation has allowed our people to live fear—a fear of unknown, a fear of what they don’t understand, a fear of prosperity, of trust. My goal is to unite our people. To allow them to see the importance of what our futures might hold, should we continue to be negligent to our neighbors. At least, thats what the Legions dutiful daughter would tell you. Between you and mean, Sarah, my goals are simple. Live without fear. Live without lies. Control the darkness and maybe, possibly find happiness along the way.

I used to fear death. I don’t anymore. It’s the darkness within me I fear.

3) Who, or what, has been your biggest inspiration?

My mother has always inspired me to continue forward. She gives strength, even in her absence.

4) What do you enjoy doing the most?

*laughs lightly* I used to love climbing the apples trees within the backyard of our home or reading beneath them on a lazy summer day. Those days I was longing for a distraction from the lies we spun. Now, as fickle as it would seem, I enjoy spending time with those I love the most—Rob, Carter, Tove, Cast and Trinity.

5) Where is your favourite place to be?

*blushes* There’s this rope swing, that hangs from one of the apple trees in our backyard…It used to be my favorite place under the stars. I would spend hours out there, just gazing at the sky, wishing upon more then one shooting star. The swing holds some of my favorite memories.

6) What would be your perfect day?

That’s a tricky one—filled with enormous possibilities. Though, if I must answer, I would say one spent with Carter. No arguing, no lying, no worry about our linking souls, but one spent barefoot in the grass—truly understanding one another and possibly discovering who we truly are.

7) What word would describe you the best?

Toxic. Those I love and care for deeply, don’t truly understand the wickedness within me—but I know. It’s only a matter of time before they do…and by then the damage will already be done.

8) What are you passionate about?

Change and the love I have for those I care for. I want nothing more then for their happiness. A world without fear or chaos. A place that they can truly be themselves and believe in the better of tomorrow.

9) What makes you happy?

The friendships I have gained along the way.

The gods we are sad to be descendants from. Those who found our mere exist to be a nuisance. An entertainment to them when they found themselves in need of it. For they turned their backs on their blood—left us to defend and protect ourselves against those that fear us, but the gods themselves placed that fear in humanity. We have paid the price for their neglect. I don’t believe they exist any longer. For if they have—wouldn’t they have heard our calls…felt something towards their descendants. Wished to help save those that are innocent? No, perhaps they never existed, but were created for children stories and to give The Touched a reason of hope. It angers and saddens me, because there has never been nor will there be hope—not unless we demand it.

Follow the The Touched by Jennifer Weiser Blog Tour and don’t miss anything! Click on the banner to see the tour schedule.

Jennifer Weiser is a young adult author who has always been a book nerd and a bit chocolate obsessed. Writing has always been a favorite escape, but quickly became a passion not long after the birth of her daughter. When she isn’t combing the shelves of her local book stores or blogging about newest book obsessions, you can find her nestled in her nook creating worlds she hopes that one day will inspire her daughter, who not only has given her the courage to follow her dreams–but offers the inspirations that help color their worlds together.