Dark Heart of Magic (Black Blade #2)
by Jennifer Estep
Publisher: Kensington
Release Date: October 27th 2015
Genre: Young Adult, Urban Fantasy, Romance, Paranormal, Magic, Supernatural
Rate: 4 out of 5 stars
Synopsis:
Something Wicked This Way Comes…
As a thief, I stick to the shadows as much as possible. But when the head of the Sinclair Family picks me to compete in the Tournament of Blades, there’s no escaping the spotlight—or the danger.
Even though he’s my competition, Devon Sinclair thinks I have the best shot at winning what’s supposed to be a friendly contest. But when the competitors start having mysterious “accidents,” it looks like someone will do anything to win—no matter who they hurt.
As if I didn’t have enough to worry about, mobster Victor Draconi is plotting against Devon and the rest of my friends, and someone’s going around Cloudburst Falls murdering monsters. One thing’s for sure. Sometimes, humans can be more monstrous than anything else…

Having read the first book in this series, I was very happy to have the opportunity to read the second… and I found myself enjoying this one as much as the first.

It was good to be able to see Lila struggling with her feelings for Devon, but that the romance didn’t seem to take up the whole book. I did prefer the relationship between Felix and Deah… and I couldn’t help but feel a lot of empathy for Deah, since this book showed even more how badly her father and brother treated her. It was good to see that she had a good relationship with her mother, though.

There were some good scenes of tension in this book and I enjoyed seeing Lila’s interactions with Oscar. While I didn’t really like that she was chosen, over some of the others, to enter the tournament, it did become quite interesting to see how the tournament was conducted… and the different talents and the strengths that were used while trying to win.

I really didn’t like Vance’s character and he didn’t really seem to exist outside of annoying Lila. I felt he came across as a foil and it would have been good to see a bit more depth to him.

I didn’t like Vince at all in this book… even less than the first one… and it was interesting to see the stark differences in how he and Claudia viewed members of their family. I did notice there was quite a bit of repetition in this book… like, ‘cold burn of magic’ and the references to Oscar being on a sugar high.

I couldn’t see any redeeming qualities in Blake’s character, either. I did like how things progressed with him during the tournament, though. And it was really good to see more of how Deah’s talent worked. I thought the descriptions of the talents were probably among the strongest in the book.

I am hoping to read the next book in this series in the future. This one ended on kind of a cliffhanger and it would be good to see how things progress for the characters. 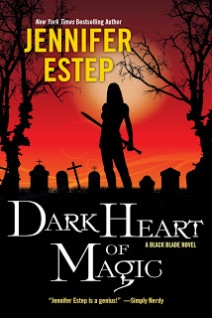 Working for the mob isn’t all that it’s cracked up to be.

Oh, sure. It always looks all glitzy and glamorous on TV and in the movies. Folks wearing slick suits, eating in fancy restaurants, and talking about how to best deal with their enemies over coffee and cannolis. And maybe I’d actually done some of those things, during the few weeks that I’d been working for the Sinclair Family. But most of the time, taking care of Family business was a boring, tedious job, just like any other—

I ducked just in time to keep from getting pelted in the face by a blood persimmon. The ripe, apple-size fruit sailed over my head and splattered against the ground. The skin exploded on impact, painting red pulp and seeds all over the gray cobblestones, and filling the summer air with a sweet, sticky scent.

Sadly, the cobblestones weren’t the only things covered in fruit—so was I. Red pulp had soaked into my blue T-shirt and gray cargo pants from where I’d already been hit, while seeds and bits of skin clung to the laces of my gray sneakers.

An angry, high-pitched cheep-cheep-cheep sounded, the noise somewhere between a crow’s cawing and a chipmunk’s chirping. I glared up at the tree where the persimmon had come from. A creature with ash-gray fur and emerald-green eyes jumped up and down on its hind legs on a branch about ten feet above my head. The creature’s jumps were so hard and powerful that more ripe blood persimmons dropped from their branches and hit the ground, bursting open and adding to the oozing mess that already coated the cobblestones. Oh, yeah. The tree troll was definitely upset that it had missed me with its latest fruit bomb.

Tree trolls were among the many monsters that made their home in and around Cloudburst Falls, West Virginia, along with mortals and magicks, like me. I’d always thought of the trolls as sort of a cross between an oversize squirrel and the flying monkeys from The Wizard of Oz. Oh, tree trolls couldn’t actually fly, but the black webbing under their arms helped them catch wind currents as they hopped from one branch and tree to the next, while their long, bushy tails let them dangle upside down. The trolls were only about a foot tall, so they weren’t nearly as dangerous as copper crushers and many of the other monsters that inhabited the town. Most of the time, they were pretty harmless, unless you got them riled up. And this one was certainly riled, since it kept jumping up and down and cheep-cheep-cheeping at us all the while.

Follow the Dark Heart Of Magic by Jennifer Estep Blog Tour and don’t miss anything! Click on the banner to see the tour schedule.

Jennifer Estep is a New York Times and USA Today bestselling author of urban fantasy and paranormal romance.
Her Elemental Assassin series follows the life and times of Gin “the Spider” Blanco, a barbecue restaurant owner who also happens to be an assassin with magical control over the elements of Ice and Stone.
The Mythos Academy series focuses on Gwen Frost, a 17-year-old Gypsy girl who has the ability to know an object’s history just by touching it. She studies at Mythos Academy, a school for the descendants of ancient warriors.
Her Bigtime paranormal romance books feature sexy superheroes, evil ubervillains, and smart, sassy gals looking for love.

Estep’s new Black Blade series is about 17-year-old thief Lila Merriweather, who has a Talent for sight, along with the ability to take magic others used against her to boost her own powers. She tries not to get involved with the Families who control much of the town, but ends up in the middle of a potential turf war.

Win (1) of (3) print copies of Dark Heart of Magic (US only)
Win a $10 Amazon gift card (INT)
a Rafflecopter giveaway
//widget-prime.rafflecopter.com/launch.js