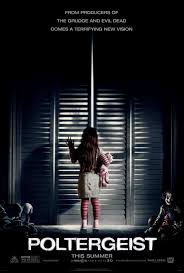 I haven’t actually seen the original version of this movie, though I do know bits and pieces of what happened in it, so I can really only judge this movie on its own premise… and not on being a remake.

I felt there were some good family moments in this film. I thought it was good that there was some time spent developing the characters… even though I felt that Kendra, at least, was quite a cliched character.

It was a little disappointing to see that technology wasn’t utilised to the extent it could have been. I was half-expecting the webcams and cell phones to play a bigger role than they actually did.

There were some particularly disturbing scenes in this movie, especially when the Dad throws up what looked like black sludge and worms. I really couldn’t help making a sound of disgust at that point.

There were some jumpy moments in this movie, but I felt a lot of the scares were more of the cheap ones. The film was entertaining to watch and although it followed a lot of the criteria for a horror movie, there were a couple of things I felt were more unique.

Maddie was a fairly precocious child, but she didn’t seem all that attached to her family members for a lot of the film. I wondered if she was supposed to have some autistic traits.

There were some moments of comedy in this movie, which I felt worked to diffuse the tension in parts. I also thought there was a nice bit of foreshadowing at parts.

I liked Griffin and I felt he came across as the most well-developed character. I was able to empathise with him the most and even though my understanding was that part of the film was vastly different, since it involved Griffin, I felt that actually worked well for this movie.

The ending of this movie worked well, in my opinion, and there’s also an extra scene after the first part of the credits. Make sure you stay for it – it is entertaining.

I’m not sure I’d buy this film on DVD, but it’s one I wouldn’t mind watching again.