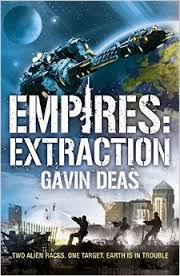 Having read the opposite side of this story, I was pretty happy to have the opportunity to read this book. I didn’t immediately recognise Roche as being one of the main characters from the other book, though… not until I read his interactions with Nicholas.

Although the idea is that a reader can follow the storyline through either of the books, I personally found I had a much better understanding of what was going on after having read Infiltration first. Although there were a lot of sightings of the Weft, I didn’t have an opportunity to learn about them in the same way I did the Pleasure, which made it much harder to understand the second race involved in the invasion.

I found the AIs particularly interesting to read about. I wasn’t completely clear as to how many there were, though. I’d assumed there were two, but I’m fairly certain there were actually three of them. I found Irrational Prime to be the most interesting out of the three… though the exchanges between it and the AI I assume it was created from amused me at various points.

I found Roche a more interesting character than I did in the other book. It was better to see his side of the situation, which meant I was able to understand his actions more. Charley wasn’t as interesting in this book, I felt. I much preferred the banter she shared with Noel and Sam in the previous book.

The Weft didn’t seem quite as violent as the Pleasure in this book, though their outward appearance came across as really scary. I could understand the motivations of the AIs… though I’m not completely sure what Irrational Prime’s goal was at the end of the book.

I liked Roche’s interactions with the others on his team and I also found myself liking him from the start, even though he and his colleagues couldn’t stop the atrocities being committed. It was also interesting to see his interactions with Shaw… and that Shaw almost seemed to shake free; at least for a second or two.

I’d be interested in reading the next books in this series. It would be good to learn more about the two races and see how the characters deal with the two separate invasions.