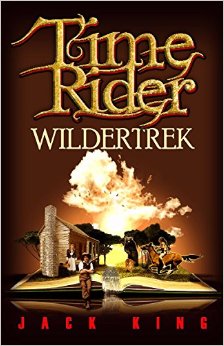 I do think the blurb of this book is more like a summary. It was still an entertaining read, but I did think quite a bit of the plot was given away in the blurb.

TJ was a character I really felt for, having had some experience with what he was going through. I liked seeing the glimpses of his relationship with his father and sister… but there did seem to be very little love lost between TJ and his mother.

I found myself wincing in the first scene. That particular thing was something the author described so well, I could almost feel what TJ had gone through. I definitely didn’t like most of the kids at school with him… and even less when it got to the end of the book.

I found the concept of the green book to be quite an interesting one when it was shown for the first time. I also liked reading about TJ’s trip into the past. I felt that the time he ended up in was researched particularly well, though I did think that some of the attitudes of people came across as a bit too modern… and one particular instance struck me as seeming completely wrong when it was described.

It was interesting to see what did affect TJ in the past and what didn’t. I wasn’t entirely clear why he was protected from some injuries and not from others.

I did like reading about Sam and his family, even if the children didn’t seem as ‘old’ as I felt they perhaps should have been, considering the time they grew up in. It was interesting to see TJ affected by what he learned of the history… and also that he made some mistakes and not everything was perfect for him, even though he was given a lot of help by the book.

I did feel that there was some good use made of foreshadowing, but I felt that some thing were repeated during the book when they didn’t need to be. Also, there’s a fight scene that, right before it happens, has an info-dumping about why TJ can do what he did.

It does seem like there’s a setup for another book and I think it would be interesting to read more of the adventures of TJ and his family. This was a quick and easy book to read and I did enjoy it.