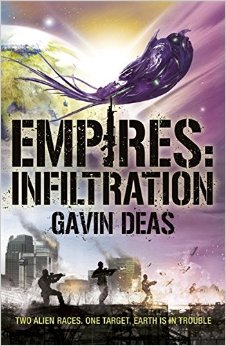 Although alien invasions aren’t exactly a unique idea, I thought that the idea of having the two different alien races, along with the opportunity to see both sides, quite a cool one.

I’m not really sure I understood what the Pleasure were trying to accomplish. Their enmity with the Weft was interesting to read about, but I would have liked to see a bit more detail about the history with the other race.

I found Noel to be quite an intriguing character, even though I kept getting him mixed up at first. I liked learning about his past… and I especially liked seeing his relationship with his brother. It was good to see two men, with vastly different jobs and goals, connected together as family.

The idea about the Face and the Enforcer were pretty intriguing ones… though both gave me the creeps, in slightly different ways. What was unclear was if they were the only two of that kind in the Pleasure… or if there were other Faces and Enforcers.

There was a lot of violence in this book… a lot more than I was really expecting, to be honest. I found a lot of the supporting characters to be really interesting ones… but I didn’t see a lot of the more minor characters. In a way, this book seemed to take place behind the scenes… which I actually think worked for the plot.

I did think it was good that the content of this book didn’t shy away from the violence… but I had to wonder at why the Pleasure were working a more subtle angle, considering just how physically powerful they were.

I liked the relationship between Sam and Noel and it was pretty cool to see them interacting. I wasn’t sure what angle Charlotte was playing. Even by the end, I’m still not certain what her whole purpose was.

I thought using the whole drug angle in this book was an interesting idea and I found myself caring about the characters throughout. I have the second half of this book to read… but if there’s a sequel to one or both, I would be interested in seeing more of the characters and how they deal with what’s happened.