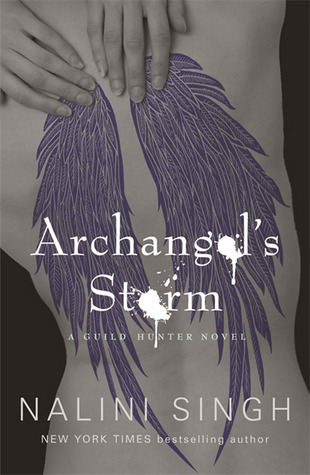 It’s been a while since I read one of the Guild Hunter books, but it didn’t take long reading this book to remember the world and the characters; and even though I hadn’t yet read Honor’s book, I found the events referenced to easy to follow.

Jason was a character I could really empathise with, even though I know he didn’t need or want sympathy. Being able to learn about his history and his motivations was as fascinating for me as it was for Mahiya, a character who I also felt a lot of empathy for. I finished the book with a strong sense of hatred both towards Neha and towards Mahiya’s mother. It was disappointing not to see much depth to Neha, who came across as a villain more as a kind archangel – that was referenced by the other characters, but not shown at all in the book.

I liked being able to see glimpses of Raphael and Elena’s relationship, along with Honor and Dmitri’s. It was nice to see that, even though the focus with the book was on another relationship, the other characters did put in an appearance too.

I found the romance and how Mahiya and Jason related to each other to be very realistic. While both of them came across as broken through the course of the book, I thought that Mahiya in particular showed her inner strength, even if she wasn’t outwardly as strong as Jason. And I really liked the opportunity to see more of the other characters, such as Venom.

Even though the romance was the main focus of the book, there was enough of a plot involved to keep me engaged and reading. I did get the impression that all of the archangels just saw humans as insects or pets…maybe something to be entertained by or care about, but humans played such a small role in the world, it was difficult to see them as anything other than cattle at worst and glorified pets at best.

There were definitely some disturbing scenes in this book, but I didn’t really find it to be too over the top, even when it came to the violence.

All in all, I very much enjoyed reading this book and stepping back into the Guild Hunter world. I definitely plan to explore more of it in the future.