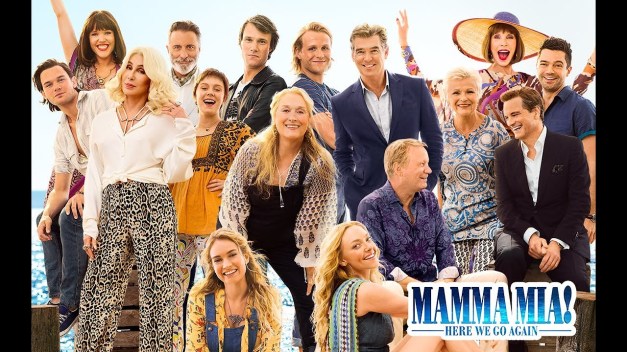 I really liked the songs. The very first one, performed by Donna and her friends, was really good and very catchy. It might have been my favourite, though there were plenty of other songs I liked as well.

Speaking of Rosie and Tanya, I thought that the actors who portrayed their younger selves were absolutely fantastic. Not only did they look like the older versions of the characters, but the mannerisms matched perfectly.

I do have to say, considering when this movie was supposed to be set, the fashions didn’t really fit with that era; and especially given the images shown of Harry, Bill and Sam in the first movie. I felt that this whole movie would have worked a lot better if nothing had been mentioned about what year it took place in.

Some things seemed to be left by the wayside from the first movie, such as Sophie’s two friends who were her bridesmaids and were never so much as mentioned in this movie. And there were several bits and pieces that were a contradiction to what had been written in Donna’s diary.

It was really good to see the younger selves of Bill, Harry and Sam, but I have to say, none of them matched quite as well to their older selves as Rosie and Tanya did.

I really didn’t feel that Sophie’s grandmother added anything to the storyline. It seemed like she only put in an appearance for one song and really didn’t live up to her hype.

By the end of the movie, I did feel quite emotional and I did enjoy the songs and the opportunity to see more of Donna’s history. This was definitely a movie I’d like to watch again in the future.