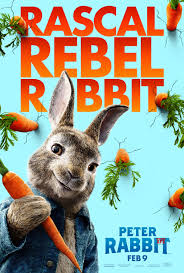 Having read Beatrix Potter books as a child, I was immediately interested in watching this movie; though I didn’t plan to watch it so soon.

I liked the fact that the movie, although starting off with the basic storyline of Peter Rabbit and Mr. McGregor, showed an entirely new storyline. I felt that Peter’s mischief came through really well and it was good to see him interacting with his sisters and cousin, along with the rest of the animals. And I also really liked how Bea related to the rabbits.

I was a bit confused by the whole talking thing, as I’d assumed at first that all it was was the animals talking to each other and the ‘language’ being ‘translated’ so that the viewers could understand. However, by the end of the movie, that had been turned on its head; at least that was what it seemed like.

I couldn’t help but feel sorry for Thomas, even though I had some very mixed feelings about him for a lot of the movie. It was fun to see that he and Peter were basically rivals, though.

I also really liked Cotton-Tail. Yes, she was insanely reckless – but it was still a lot of fun to watch her and her sisters, especially when Peter expected them to act as lookouts.

For all the fun and humour in this movie, I did like the fact there were some serious aspects as well. And the use of Bea’s paintings of the the rabbits was good, too, even if they were in stark contrast to the more abstract paintings she was doing.

This movie was an awful lot of fun to watch, but I wouldn’t recommend taking very young children to see it, as a lot of what went on would go right over their heads.