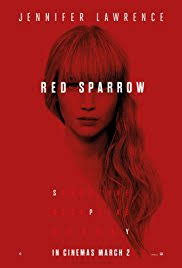 I haven’t read the book this movie is based on, but when I originally saw the trailer about a year or so ago, I was really intrigued by it. Even if it did seem like an action-spy movie, it came across as different enough that my interest was piqued.

It was good to see the different paths Dominika and Nate took, though Dominika had more of her past and motivations explored than Nate did.

While the scenes with Dominika being trained as a sparrow were really disturbing, they were also very intense to watch. I did think that Dominika came across as a very tough woman during the course of the film; even when she was being hurt, it was fairly obvious she wouldn’t break.

It was good to get glimpses of how the bigger picture worked with both the Russian and American intelligence agencies, though I did find it a bit harder by the end to figure out all of the politics involved.

There was a lot of violence in this movie and it was very gory in parts; though I have to say, it could have been a lot worse than it actually was. The movie didn’t shy away from the violence, but didn’t go over-the-top with it. I can’t really say the same for the sexual connotations, though.

Dominika’s uncle was a really disturbing character and I couldn’t help but cringe every time he appeared. I did kind of wonder what her mother was doing while Dominika was gone for so long, though, as it seemed like Dominika never made any attempts to check up on her.

Apart from Nate and Dominika, there weren’t very many likable characters in this movie…but I did really like them and I enjoyed seeing them interacting with each other.

This movie was engaging and I did like watching it. I would probably watch this movie again at some point in the future.