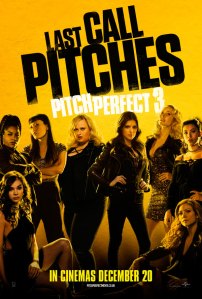 This was another movie I had some quite mixed feelings about. While it was good to see there was some acknowledgement of the repeated plot devices, such as the riff-off, it was disappointing to see none of the male characters from the previous movie put in an appearance.

While a film with so many characters couldn’t really show details about all of them, it was good to see a bit more focus on the characters like Aubrey and Fat Amy. I couldn’t help but feel sympathy for Jessica and Ashley, both of whom seemed to be characters only used as filler; a fact that might have been acknowledged by the movie, but was still disappointing to see.

I liked being able to get glimpses of the lives of the former Bellas, but Gail and John were even more annoying in this movie, if that’s possible. I can’t really say I knew any more about them in this movie than I did in the previous one.

I thought the idea of the movie, with the groups singing for the troops, was a really good one and I felt the movie would have stood strong without the need for the competition on top of everything else. Unlike the previous two movies, I couldn’t really have cared less about the competitions; and the other groups lacked any real conflict.

I really liked the songs, whether they were being performed with or without instruments. And I liked seeing Lilly have a bit more of a role in this movie outside of just being the weird girl.

I thought Fat Amy was awesome in the previous two movies, but I found her more unkind and less humorous in this, which was a shame, as I felt she was a strong character previously. And there was a lot shown about her past and what she could do that had zero foreshadowing.

I was a bit disappointed in this movie and I won’t rush to watch it again any time soon, even though I do intend to listen to the soundtrack again in the near future.