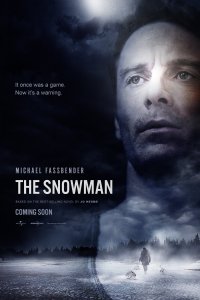 I haven’t read the book this movie is based on, but I still found the movie easy to follow. I couldn’t help but feel a lot of sympathy for the boy at the beginning of the movie, even though it was clear that he was going to grow up to be the murderer as shown in the trailers.

I did find Harry to be an interesting character. While I wasn’t sure what drove him to drink, it made him intriguingly flawed. I did, however, get increasingly frustrated with the lack of communication between him and Katrine. I think a lot could have been avoided if they’d just talked to each other – and the way they worked together seemed to be accidental.

I liked seeing Harry’s relationship with Oleg and it would have been good to see more of their interactions with each other.

I did, however, feel that there was too much going on in this movie. There were several other storylines that were introduced and then seemed to just fizzle out. And there were quite a few scenes where the viewer was shown how something happened, but the characters weren’t shown figuring it out.

It was interesting to see the two different cases and to see how they converged towards the end. I was, however, left with a lot of questions by the end. I felt that the police didn’t follow the leads and ignored some of the clues that were left. While the characters were well-written and the actors played well off each other, I didn’t think there was enough foreshadowing or clues for me to follow as a viewer.

I enjoyed this movie for what it was, but it’s not something I plan to watch again in the future. I felt there was too much going on and not enough given for the ending to click.