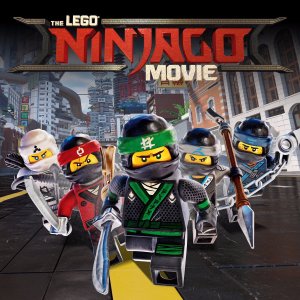 I don’t tend to watch Lego movies or television series. When they’re based off of already existing franchises, I tend to prefer the original formats. And I find the Lego versions to be childish rather than family-friendly. Having said that, I have a four-year-old nephew who loves Lego Ninjago. And the episodes I’ve seen when he has it on have intrigued me.

While it was interesting to see the movie start off in the real world, I didn’t really like that aspect. The rest of the movie didn’t really resonate with me so much emotionally, as it was more difficult to suspend my disbelief due to that opening scene.

I liked Lloyd a lot, but I struggled a bit more to differentiate between the rest of the ninjas. Out of those, it was only Zane who was distinctive enough to stand out for me.

It was easy to empathise with Lloyd’s feelings of abandonment, but I felt Garmadon didn’t really have as much depth to him as I’d seen in the series my nephew watches. For a villain, I felt he was very immature.

Although there were some humorous moments in this movie, there was really only one that made me come close to laughing. That was also the scene that made me wonder how virtually no one in the city of Ninjago had figured out the identities of the ninjas.

I did like the instances of bonding between Garmadon and Lloyd during the course of the journey, but the appearance of the cat, while it did kind of fit in with the feel of the movie, introduced an element that made it more difficult for me to suspend my disbelief.

All in all, this was an okay movie that worked as a family film, but I didn’t think there was much below the surface. I’m sure my nephew would enjoy watching the movie, though.