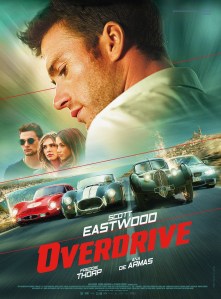 While watching this movie, I couldn’t help but compare it to the Fast and the Furious franchise. By the end of the movie, I’d stopped making those comparisons, but it was harder to distance at first.

I did like seeing the relationship between Andrew and Garrett, but I would have liked to see more focus on the brothers and less on the romance that has to permeate every single Hollywood movie. There was a lot of good banter between them, but I didn’t get a clear idea of how they viewed each other.

It was good that there were some elements of foreshadowing and the scene at the beginning with the car theft was a very cool one. I did like seeing the relationship between Andrew and Stephanie, though I felt I was looking at the team already formed. And when they brought new people in, none of them were really developed characters. When watching, I just had the feeling they were the grunts.

This film could have been cleverly done, but I felt it fell short. While some of the elements made sense, there was more that didn’t. By the end of the movie, I was left with questions about how everything fit together.

I personally wouldn’t have given this movie a 12A rating, as I felt the elements of violence and brutality meant the movie should have been closer to a 15. The characters in the movie seemed to be much the same as any movie about people running cons/scams, with the only real difference being the relationships between them.

I did enjoy watching this movie and towards the end, I was thoroughly involved and rooting for the good guys. I think more foreshadowing throughout would have made the film more effective.

While I wouldn’t buy this movie on DVD as soon as it came out, I wouldn’t mind watching it again in the future.