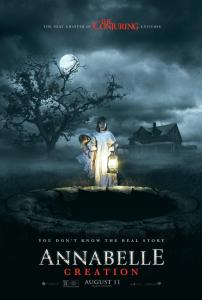 I really liked the fact that this movie seemed to tie quite well into the other movies in the Conjuring universe. While I did think there were some flaws, I did find it entertaining and spooky enough to sit through.

There weren’t really too many surprises in this movie, as the rules and bad creatures have already been established in the previous movies in this franchise. It was good to see the origins of the Annabelle doll. However, there were later indications that the doll played more of a part in Bee’s life than the original scene indicated.

I didn’t think much of the older girls in the orphanage. Janice and Linda were probably my favourite of the girls. I just wanted them to get adopted and have a proper family. Out of the six girls, those two were definitely the most developed character-wise.

There were a lot of quite creepy moments in this film, but by the end of the movie, I felt it lost quite a bit of the effects, as the best horror comes from what isn’t seen. And it was fairly obvious that the culprit wasn’t just a ghost.

There was a nice set-up at the start of the movie for what came later, especially as there were things that happened then that made sense to me as the viewer, even if the characters didn’t know what was going on. The doll house was one of those things that was effectively creepy. The demon appearing visually was less so. And by the end of the movie, it was kind of an overdose on spooky. I wasn’t scared and was just rolling my eyes at the cheap jump scares.

It was nice to see more from the Conjuring universe and have some questions raised previously answered. But there are still things that weren’t really made that clear. And while the ending tied in neatly with previous films, I wasn’t a big fan of it. I don’t think I’ll be watching this movie again.