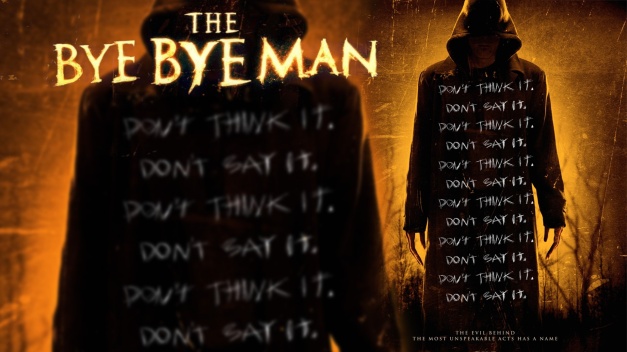 When I saw this movie advertised, I was quite intrigued by the concept of a killer only a danger when someone knew the name. And the first scene was very effective, as it showed a man driven by desperation to the point of going on a shooting spree to wipe out the name. And the scene itself was powerful, considering the stark contrast between the idyllic suburb and the violence of the murder spree.

From there, however, I felt the movie began going downhill. Like with so many modern horror movies, it used too many cheap jump scares. And partway through the movie, it felt like I’d missed a lot of build-up when Sasha started talking about how the Bye Bye Man was coming for her.

Speaking of Sasha… out of the four who first heard the name, only Elliot actually seemed to have any depth to him. I felt like I was being told what his relationships with Sasha and John were like, rather than seeing for myself. And I was in agreement with Virgil. Whose girlfriend was Sasha’s anyway?

It was good to see Elliot trying to track down the origins of the Bye Bye Man, but as soon as ‘he’ started appearing, any fear of the unknown was lost. I was very disappointed that the showings of the train tracks didn’t go anywhere.

I did think it was good to see that the police actually seemed competent in this movie. I did feel a lot for Elliot and his attempts to protect anyone else from hearing the name. Out of the four, it seemed he was the only active one… or at least the only one trying to do anything about the trap they were in.

I felt the movie would have been more effective if the Bye Bye Man hadn’t existed outside of the characters’ heads. On the whole, there was a lot of potential in this movie that I felt wasn’t lived up to. This isn’t a movie I plan to watch again.