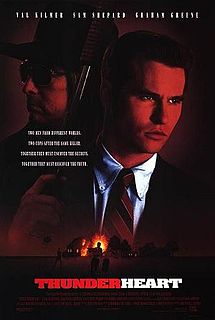 I only found out about this movie due to reading something another person wrote about it.

While this movie was an older one, I did find it engaging with some really good moments of humour. Crow Horse made me smile more than once in his interactions with Ray and the others.

I did like Ray’s character in this movie, but although the actor was a good one; and, I felt, brought a lot of emotion to the role, I didn’t feel he was the right choice from an ethnic standpoint, given Ray’s Sioux heritage.

I thought it was really good to see the conflicts that existed between the different people who lived on the reservation, but I did think there were a few too many characters and it was hard to differentiate between the people Ray and Cooch worked with. I also found it hard to understand why there were so many roadblocks at that time.

I did find Maggie an interesting character and it was good to learn bits and pieces about her past, though by the end of the movie, I was left with some questions; partly about her and partly about the children she had living with her.

I liked being able to see bits and pieces of the culture, mixed in with the way the people were forced to conform to ways that weren’t their own. I did feel a lot of sympathy for Crow Horse when I learned about the way he’d been brought up and I could understand why ARM seemed like such a breath of fresh air.

I did like that this movie was a bit of a mix of genres, but I liked the journey Ray went on and I really enjoyed his interactions and friendship with Crow Horse. There was a lot of action and I liked the symbolism/use of the culture in the movie.