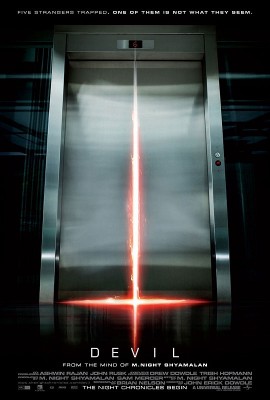 I watched this movie quite a long time ago, but given the opportunity to watch it again, I found it entertaining and engaging.

I did feel the movie was a little low budget, though that did work with the atmosphere and the setting. It was also nice to see something of the main characters and their personalities before they ended up trapped in the elevator.

I thought the movie did a good job of showing the atmosphere in the elevator with the group stuck together. It was easy to identify with the fear and panic experienced by the characters as they were stuck longer and longer in the elevator.

I thought it was good to learn about the different characters as the movie went on. While that was mostly true of those people trapped in the elevator, I especially liked Detective Bowden and I felt he had a lot of depth to him. It was good to see how he cared about the safety of the other characters… even though he had his own issues to deal with.

The lights going out in the elevator was particularly scary; more so because of the visions that were interspersed in that darkness. It was an interesting idea to have them able to hear those on the outside while in the elevator, but not be able to communicate back. However, I did feel that there were ways they could have got messages out… considering at least one of the characters might have some knowledge of signals; and at least a few of them had phones.

Although there were a lot of gruesome scenes in this, I thought the scenes that didn’t show as much worked much better… even if it was fairly obvious what had happened. And I really liked the ending of the movie and the way the stories fit in with the whole theme, even if it was in a similar vein to previous films from the same director.

This is a movie I’ve seen before and enjoyed on each subsequent viewing. I would probably willingly watch it again in the future.