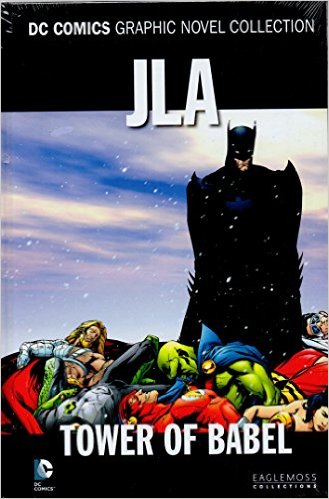 I don’t really remember at what point I was introduced to Batman. I vividly remember watching an older film that had Catwoman and the Penguin in it, but I couldn’t pinpoint exactly when I became aware of the Caped Crusader.

This wasn’t the first comic book in the collection, but it was the one I read first, due to the blurb. I was very intrigued by the potential issues of trust and betrayal in the mains set of comics.

It was very interesting to see Batman unable to trust even those who were supposed to be his allies. I did feel a bit of sympathy for him, as I think not being able to trust is a lonely existence… but even if he had reasons for keeping files on the JLA, I didn’t think he should have gone as far as he did.

It was heartbreaking to see how badly affected the members of the JLA were by the traps utilised against them. While Superman was the only other hero I knew particularly well, I thought that the traps showed their weaknesses really well… and while I was confused about some of the switches between the characters and who was grouped with who, I thought this was a really good way to allow me to get to know some of the members of the JLA.

Even though I didn’t know all of the members that well, it was good that I was able to get some details about them in the first set of comics, at least. I liked being able to learn things about the characters, such as the Green Lantern being really artistic… and it was awful to have him lose his sight. And I couldn’t help feeling sympathy for Aqua Man, as even though they all went through awful things, forcing Aqua Man to fear what he needed to survive.

The most awful thing to see was Superman’s weakness, even though I wasn’t completely sure how it had affected him without outright killing him. And it was interesting to see how Wonder Woman’s weakness seemed to be as much about her being unable to surrender. But I could definitely understand why they took a vote at the end of the comic.

The second set of comics were intriguing, though they were very different in style. It was good to see the JLA having to battle alongside each other against an early threat.