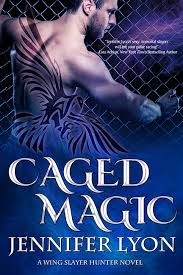 It took me a while to read this latest book in the Wing Slayer series… but once I started reading it, I very quickly remembered why it had shot to my favourite paranormal romance series.

Although it has been a while since I’ve visited this world, it didn’t take long for me to be drawn back into the world. I found Linc, in particular, to be a character I could really empathise with. Knowing more about his history in this book helped me to understand him much better… but seeing him struggle so much against the unnatural bloodlust was pretty awful to read about. I had a whole lot of respect for his strength of will by the time I was halfway through this book.

Having experienced so much frustration in their novella, I liked being able to see glimpses of Ram and Ginny’s relationship. And it was good to get some foreshadowing for Eli’s book… plus, I liked seeing more of him and the rest of the Wing Slayer hunters generally.

I found Risa to be a really intriguing character and it was good that I learned bits and pieces about her past along with Linc. It was good to see how desperate she was to save Kendall and I had a strong dislike for Archer… which only grew as I reached the end of the book, even though I got some of the background about the choices he’d made.

It was good to see the emotions given a chance to grow between Risa and Linc. And I liked that things moved at something of a more sedate pace… even though it wasn’t that sedate. And being able to see Risa link emotionally with the falcon was really good… especially since the falcon seemed to be a bit different to the other familiars.

I also liked seeing Baron and I would have liked to get a bit more detail of his background. It was interesting to see the two different groups of witch hunters and how they worked together, but were still kept separate.

I did have a lot of sympathy for Risa, considering the effects on her from the souls caught in her shield spell. And the interactions with Nola were really sad to read about.

Having read this book… I’m really hoping to read the next book/s in the series in the near future. The foreshadowing regarding them are really making me want to read and see what will happen with their relationship. Plus, I’d like to see more of the Wing Slayer himself.