Blurb:
When Alexandria Ray’s romance series becomes an overnight sensation, the world and its demands close in on her. After years of struggling to maintain the pace her publisher, agent and the world expects, she needs a break. Enrolling as a student at Columbia University is step one to finding herself again. Finding Arsen Daniel was not on her list.
Arsen Daniel, along with his best friend, built an empire in the form of an exclusive, psychology-based dating service. When an old friend invites him to teach a course at Columbia, he accepts. The course? The Psychology of Love.  Sounds simple enough and the publicity alone will make it worth his time.
Arsen didn’t expect to meet his match in the form of a sarcastic blonde, hell bent on holding to her belief that true love doesn’t actually exist. After all, what woman, especially a world-renowned romance writer, doesn’t believe in happily ever after?
Something in Alexandria’s eyes tortures him. She reminds him of someone from his past and that is a very bad thing. 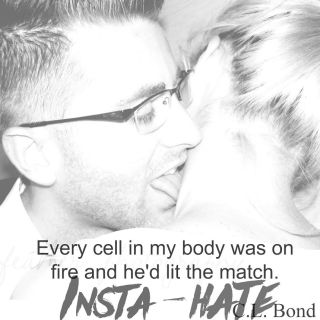 “Do you want to grab a seat for a few minutes?” he asked.
I looked around and the place was mostly deserted. “Sure.” We settled in two comfortable padded chairs. “For the record, I don’t want to do any of the things Jillian has planned.”
He smiled. “How else do you plan to prove your point?”
“My point will be easily proven. Love doesn’t exist.” I stared at his lips. The bottom was slightly plumper than the top. His blue dress shirt was rolled to the elbows. And his forearms were toned. Damn it. Why should men have forearms like that? Why? They flexed when he raised his cup to his lips, and then flexed again when he sat it back onto the table.
“Why would any woman want that to be true?” he challenged, one brow arching up.
“I don’t want it to be true, it just is.”
His eyes narrowed and he crossed his arms over his chest. “How do you know? Forget the assignment, forget proving a hypothesis and this damn paper. How do you know? Why do you think that?”
I swallowed. “Because if I’ve ever felt it, I don’t remember it.” His brows furrowed and he parted his lips to say something, but never did. What could anyone say to that?