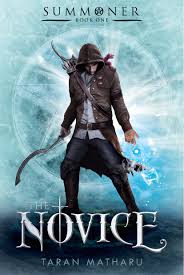 Having been a long-time reader of fantasy (other genres too, of course, but the first books I remember reading were fantasy), I’m always on the lookout for good fantasy series… and I found myself really enjoying this book.

I found Fletcher to be a really interesting character and although I would have liked to see a bit more of his relationship with his father figure before everything that happened, I thought it was good to see bits and pieces of Fletcher’s life before he found himself the ‘partner’ of a demon… even though I did think that some of his history was a bit too cliched.

Although I was able to get to know a lot of the characters, I did find some of the more minor characters harder to get to know. I couldn’t picture Seraph very easily until towards the end of the book.

One thing I particularly liked about this book was the friendship between Fletcher and Othello. I also found Othello’s brother to be a really interesting character and I thought it was good to see the hostility between the three main races. It was good to get some aspects of the politics shown in this book… and I also liked being able to see aspects of the lessons they were all taught.

I did feel some sympathy for Sylva, especially given how difficult it was clear things were for her… even though I was less than thrilled about what her personality was like at the start. I did find it a bit disappointing that Isadora and Tarquin weren’t given a lot more depth to them, though.

I thought it was good to see that the demons did take on traits of their summoners, but that they had their own personalities. I really liked seeing Ignatious’ bond forming with Fletcher.

I found this book easy to read and it drew me into the plot really well. I cared about what was going to happen to Fletcher and although it did end on something of a cliffhanger, that just made me want to read the next books even more.