Blog Tour: Daughter of The Sun 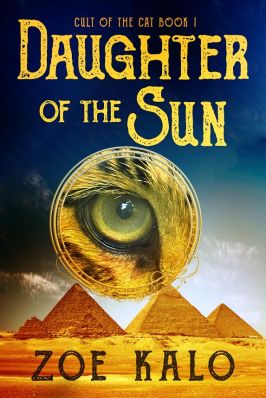 Sixteen-year-old Trinity was born during a solar eclipse and left at the doorsteps of a convent along with a torn piece of papyrus covered with ancient symbols. Raised by nuns in the English countryside, she leads a quiet life until she’s whisked away to the Island of Cats and a grandmother she never knew.

But before they can get to know each other, her grandmother dies. All that Trinity has left is a mysterious eye-shaped ring. And a thousand grieving cats. As Trinity tries to solve the enigma of the torn papyrus, she discovers a world of bloody sacrifices and evil curses, and a prophecy that points to her and her new feline abilities.
Unwilling to believe that any of the Egyptian gods could still be alive, Trinity turns to eighteen-year-old Seth and is instantly pulled into a vortex of sensations that forces her to confront her true self—and a horrifying destiny.

Since I’m an avid reader of myths and legends, I was intrigued by the plot of this book… enough so that I signed up to review it, despite my normal misgivings surrounding young adult paranormal books.

I found Trinity to be a really interesting character. While I did feel that she lost some of her strength later on in the book, I was able to relate well with her love for cats… and it was really interesting to see how she was changing through the book, though there were a couple of things mentioned by Ara that I didn’t actually pick up on.

Speaking of Ara… I really did like her as a character. While she was a bit prickly at times, I did feel that she had a lot of depth to her and it was good to see that her emotions towards Trinity weren’t one way or the other. I especially felt a lot of sympathy for her after Margaret’s death and I felt that the author showed how everything was affecting her really well.

I did feel that a lot of the secondary characters, in particular Ara’s friends and other residents of the island, weren’t really developed as well as they could have been. While I liked Seth’s character well enough, I wasn’t especially fond of the romantic hints in the book and I would have liked to see more development in the friendship between Ara and Trinity.

It was really good to see that Trinity didn’t forget about the convent and Brianna even after moving into her new life… but I did see some of the things coming quite obvious, such as who the bad guy was and the details about Slugger. I would have liked there to be a bit of mystery, rather than everything being revealed so fast… even though there were some good elements of foreshadowing.

I felt that the book did drag a bit in the middle, although there was a lot of action at the end… not to mention quite a few unanswered questions. I liked the island of cats… that’s a place I’d love to visit, being a cat lover myself.

I would like to read the next book/s in this series in the future and find out what will happen to Trinity and Ara… and how the new girl might fit into it.

A certified bookworm, Zoe Kalo has always been obsessed with books and reading. Reading led to writing—compulsively. No surprise that at 16, she wrote her first novel, which her classmates read and passed around secretly. The pleasure of writing and sharing her fantasy worlds has stayed with her, so now she wants to pass her stories to you with no secrecy—but with lots of mystery…
A daughter of adventurous expats, she’s had the good fortune of living on 3 continents, learning 4 languages, and experiencing a multicultural life. Currently, she’s working on a Master’s degree in Comparative Literature, which she balances between writing, taking care of her clowder of cats, and searching for the perfect bottle of pinot noir.
Connect with Zoe Kalo on the web:
Website: www.ZoeKalo.com
Facebook: https://www.facebook.com/Zoe-Kalo-206262253053039/
Twitter: https://twitter.com/zoekalowriter
Goodreads: https://www.goodreads.com/author/show/14951190.Zoe_Kalo
Newsletter: http://wordpress.us12.list-manage.com/subscribe?u=01bb315d869e9312ec21ddcef&id=14556e5ff4Buy Links:
#Free with #KindleUnlimited
Amazon: http://amzn.to/1pT9GNk