Blurb: Can Apollo’s curse be broken?

Seventeen-year-old Hope Nicholas is done running. Apollo’s curse has ruled her entire life, limiting her choices and robbing her of the things that matter most. But she refuses to live in fear any longer. In fact, she’s ready to do whatever it takes to break the god’s power over her existence.

When the goddess Artemis instructs Hope to impersonate a demigod and infiltrate a conservatory to get access to the Olympian library, she doesn’t hesitate. As she sees it, there’s nothing left to lose.

But once inside, Hope discovers the only way to get what she needs is to work with her sworn enemies. As the lines between demigod and monster are crossed again and again, Hope has to dig deep for the courage to accept her fate or fight for the freedom to save herself.

Demigods and Monsters is the second book in the Sphinx series. 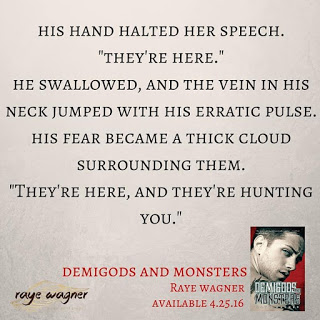 I can’t really give this book any more than 3 stars. I liked Hope well enough, even though I was irritated by the constant references to how beautiful she was. Since beauty is in the eye of the beholder, it seemed to be a lazy form of description.

It was interesting to see glimpses of the other gods and I found it intriguing that there seemed to be so much cover-up about some of the gods having had children. I was a bit confused about why Hope was so insistent that Hera had to have had an affair, though.

I thought it was interesting to learn about the historical demigods, though that knowledge just made it even more confusing in regards to the world itself. It seemed more like modern day Earth than the previous book had been, but considering the primary religion/s seemed to focus on the ancient Greek gods, how would a historical figure like Hitler have fit in?

One interesting aspect was the stance on monsters. I would have liked to see Hope act more strongly on what she believed and actually involved herself more with the other characters.

I was a bit disappointed that most of the demigods seemed to come across as cardboard cutouts, falling on one side or the other on whether they liked Hope or hated her… or were obsessed with her. Apollo’s sons, in particular, were nearly impossible to differentiate from each other. I couldn’t have named all four of them five minutes after finishing this book.

To be honest… the love triangle was so cliched, I was rolling my eyes when Xan was first introduced. I saw where it was going immediately… but it wasn’t helped by Hope’s hypocritical behaviour. She wasn’t loyal. She didn’t stick to her guns. By about halfway through the book, I’d forgotten what she was there for.

Xan was an interesting character, but the potential conflict between him, his cousin and Priska fell flat.

I felt there was a lot of potential in this book, but it wasn’t as good as it could have been. Hope’s character was fairly bland and I found quite a bit of this book boring to read. While there were some intriguing moments, the creepy scene with Apollo at the end strongly reminded me of why I don’t read immortal/teenager romances.

Raye Wagner grew up in an urban fantasy just outside of Seattle, Washington. As the second of eight children, she was surrounded by monsters, demons, and her sometimes mortal parents. She read heaps of fantasy while locked away in the upstairs room of the family cottage.

Raye studied the art of medicine long before she had an interest in the Gods on Mount Olympus.

One sunny afternoon, the history of Apollo’s ancient curse and the myth of the Sphinx dropped into her consciousness, and she’s been scribbling and typing stories in her spare time ever since.

Hope went into the sparse guest room and closed the door behind her. She let out a long, slow exhale and leaned against the door.

“How long have you been at the conservatory?”

Hope yelped. Turning around, she noticed Athan sitting on the edge of the bed.

“Sorry.” He was quickly at her side. “I didn’t mean to startle you.”

“Then what the Hades are you doing in my room with the light off?” Hope flicked the light on and glared at him.

“Right.” He took a step back. “Sorry. I wanted to talk to you, and you left abruptly.”

Hope clenched her teeth. “Oh. Well then, it’s all okay. Come on in.” Sarcasm dripped with the words. “What do you need to say?”

Athan frowned. “What’s with the hostility? Did I do something to you?”

She sputtered in her attempt to say anything, but words formed and disappeared before she could get them out. Finally, she said, “I trusted you.” She knew she was being irrational, but all the pent-up emotion erupted, blasting into the air between them. “I don’t even know what to believe anymore.”

Athan reached his hand out to touch her face, but something in her expression made him hesitate before contact. He dropped his hand to his side. “I never lied to you, Hope.”