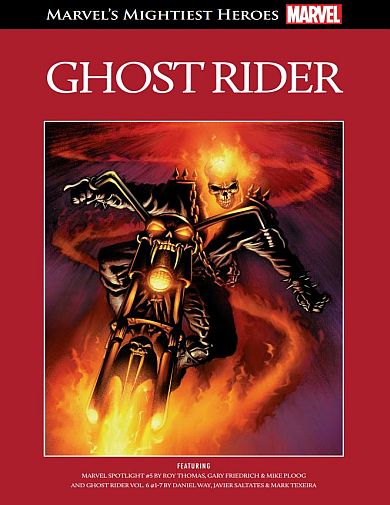 My first experience with the Ghost Rider was with the Nicholas Cage movie… but when I read this comic book, I found it really interesting to see the origin of Johnny Blaze as the Ghost Rider. I had a lot of sympathy for him when his father died and it was good to see that he was taken in by a family… but to be honest, I didn’t think much of his adoptive father. Or Roxanne. I felt that neither of them actually cared about Johnny and more about forcing him into what they wanted from him. Roxanne’s final scene in the first comic really didn’t work with how her personality came across beforehand.

I thought it was good to see how, in the second set of comics, Johnny was trying to escape from hell. I did find those comics to be a bit confusing and disjointed, though. While it was good to get some explanation as to what the devil’s plan was, I found myself getting completely confused about certain other things that had happened. This storyline in particular was quite disturbing, though I didn’t see much of the violence… still, it did leave something of an impression.

I liked being able to see Doctor Strange and his interaction with Johnny, though I did think Johnny should have actually listened to him. It would have been good to see them work together, rather than Johnny forced to target the devil alone.

I did think that Johnny being arrested was part of a series of flashbacks, so the scene right at the end confused me a lot.

The use of the second person narrative in the first comic was interesting, despite my inability to believe that Roxanne was a person who could have saved Johnny, no matter how temporarily. Despite the disjointed storyline in the second set of comics, I did enjoy reading them and it would be good to see more of the Ghost Rider in other comics.