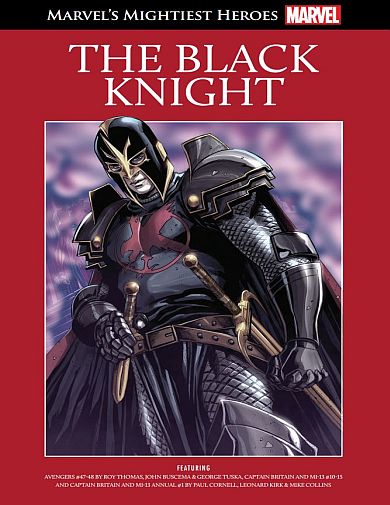 I’ve had the chance to see Dane’s character in a couple of the comic books I’ve read, so I was quite happy to have the opportunity to see his origin and learn a bit more about him… though it was disappointing to then see that there was little focus on him as a main character.

I did like the chance to see Wanda and Pietro in the first set of comics and it was interesting to have the opportunity to see Dane taking on the mantle of the Black Knight. However, I did feel that there was a bit too much exposition. While it was good to see that the previous criminal Black Knight did want the chance to have the name linked with good rather than evil, I was a bit disappointed that his change of heart didn’t seem very realistic.

I would have liked the first set of comics to focus a bit more on Dane, since he seemed very much a side character. It was interesting to see him having to battle the Avengers… but I would have liked a bit more acknowledgement on their side that they’d made the wrong move in attacking him. Still, it was good to see that they weren’t shown as being perfect. And I was intrigued to find out why Cap had chosen to leave the Avengers then… and it was good to see how his departure affected the others.

The second set of comics were a bit more confusing. Dane didn’t look a whole lot different to Captain Britain outside their costumes and I found myself constantly confused over who was who. I also found the comic from the annual to have some weird scenes in… what was going on with the game, for instance? While I’ve been able to follow other storylines more or less so far with little background, this was particularly confusing.

I did like being able to see the other characters I’d met before, such as Blade… and it was intriguing to see how things went with the vampire invasion, though I was a bit confused about the ending, which wasn’t really explained very well. And I did feel sorry for Jac’s son. I also really liked Faiza’s character and I would have liked to see more of her.

I would like to see more of Dane as an individual character in future comics.