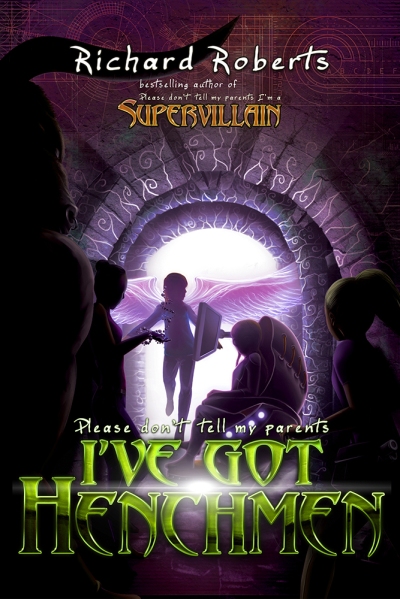 What would middle school be like if half your classmates had super powers?  It’s time for Penny Akk to find out.  Her latest (failed) attempt to become a superhero has inspired the rest of the kids in her school to reveal their own powers.

Now, all of her relationships are changing.  She has a not-at-all-secret admirer, who wants to be Penny’s partner almost as much as she wants to be Penny’s rival.  The meanest girl in school has gained super powers and lost her mind.  Can Penny help her find a better one?  Can she help an aging supervillain connect with his daughter, and mend the broken hearts of two of the most powerful people in the world?  And in all this, where will she find time for her own supervillainous fun, or even more dangerous, to start dating?

It’s going to be a long, strange semester.

My career as a mild-mannered middle school student ended the usual way, with a quarterback turning into a shark.
Or maybe he was a forward receiver. Or made line drives. Penelope Akk, nerd supreme, had more important hobbies than Sport. What mattered to me was that one second a boy on our team was human, and the next he turned big and bulky and grey. His jersey ripped over his suddenly massive upper body, and it was a blessing to us all that he wore stretchy pants.
“♪We will / We will♪” chanted the girl next to me, before trailing off with everyone else.
Shark boy certainly rocked them. In a display of truly bone-headed bravery in the finest Sport traditions, the opposing team tried to tackle him. They bounced off his shoulders like trout thrown at a freight train. One actually kind of clever guy tackled Sharky’s stumpy legs, hoping to at least trip him up. No good. The poor brave sap got kicked all the way off the side of the field, and hopefully hadn’t gone from halfback to hunchback.
As fast and sinuous and unstoppable as a hippopotamus, Sharky stomped down to the opposite goal, waving the football over his head and ranting at the top of his lungs. “I’m sick of this! I’m sick of hiding my super powers, pretending to compete with you humans when I’m stronger than all of you put together! Who’s the Most Valuable Player now?!”
Actually, I was making up that part. Up in the stands, I couldn’t possibly make out what he was yelling. Just call it an educated guess.
When he crossed the finish line, Sharky threw down the football and began his victory waddle.
The girl next to me asked in squeaky bewilderment, “Can he do that?”
The girl next to her asked more heatedly, “Does that touchdown count?”
The boy on the other side of me recoiled back in his seat. “He’s heading for the other team again!”
That would be my cue. Standing, I pulled my goggles out of my pouch and buckled them ceremonially over my eyes. A careful twist of my wrists, and then a second careful twist when I didn’t get the first one exactly right, and the rotors on my forearms blew the sleeves of my loose sweater off all the way to the shoulders. My brown braided pigtails flapped behind me as I soared up off of the bleachers, dropping down to land in a crouch next to the cheerleaders.
The head cheerleader, Marcia, slapped me in the chest with the side of her baton. Bared teeth accompanied a hiss like an angry cat. “You are not taking this from me, Penny Akk!”
Wincing, I pointed past her. “We’re both too late.”
A girl with wildly spiky blue hair charged onto the field. Was that Cassie, from English class? What happened to her hair?
Brilliant blue arcs of electricity flew out of her body with every step, grounding in the ripped up turf. Well, that answered my question. A number of questions.
“No no no no no no no! You stupid, spotlight-hogging, neckless block of rancid fish oil!” Cassie screeched. She charged towards the shark boy, throwing out a double-armed blast of lightning bolts that fell into the ground yards short of their target. C- for mastery of her powers, but a solid A for villainous banter.
Instead of staying out of her range, the stupid, spotlight-hogging, neckless block of rancid fish oil lumbered up to meet her, yelling back, “What are you talking about?”
Lightning sprayed all around as Cassie waved her arms. Some of it hit the shark boy, but only made him shiver. Far more dangerous had to be the spit flying from her mouth as she screamed, “You clod! You heap of stinking chum! I had it all planned out! This was Lightning Wisp’s big debut, and you ruined it, Fish Guts Man.”
“Sharky,” he growled.
I gaped. So did Marcia. I’d been thinking of him as ‘Sharky’ as a joke. He was still sticking with that dumb name? Yes, he’d used it before in a spectacularly failed bid to come out as a supervillain, and Marcia and I had both made fun of him for it.
Lightning Wisp put her hand to her ear, and mocked, “Sorry, what was that? Did you say your name was Filet-O-Fool?”
“SHARKY!” he yelled, and finished his transformation.
I’d seen him do this before, but I’d forgotten how big he was. And ugly. So, so ugly. Baboon butt ugly. Naked mole-rat ugly. He was at least six feet tall, bulging with muscles where he shouldn’t have muscles, and his fanged mouth jutted out of a malformed, pointed face. Worse, instead of just on his neck, gill flaps opened and pulsed with glimpses of red meat all over his shoulders, arms, and the sides of his torso.
I screwed up my nose. I didn’t even want to look at that.
For once, Marcia was more professional than me. With no sign of having to restrain her lunch, she strolled out to meet the two bickering young super-villains. Every cartoon’s stereotype and every boy’s dream of a dishwater blonde cheerleader in a short skirt, she didn’t need powers to look more dangerous than both of them. She had poise and confidence, and they didn’t.
She waved her wand, flicking it first at him, then at her. “Put your powers away and go home. You both look like fools, and Charlie, you oaf, you just made us forfeit the game. Neither of you got what you wanted, but you haven’t broken any laws. Go home before a superhero gets here.”
They both glared at her, and Sharky gurgled, “Shut up, Marcia.”
Marcia twirled her baton, and sneered. “Sorry, I wasn’t clear. I meant go home, or I’ll make you.” 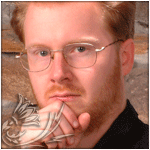 Richard Roberts has fit into only one category in his entire life, and that is ‘writer’, but as a writer he’d throw himself out of his own books for being a cliche.

He’s had the classic wandering employment history – degree in entomology, worked in health care, been an administrator and labored for years in the front lines of fast food. He’s had the appropriate really weird jobs, like breeding tarantulas and translating English to English for Japanese television. He wears all black, all the time, is manic-depressive, and has a creepy laugh.

He’s also followed the classic writer’s path, the pink slips, the anthology submissions, the desperate scrounging to learn how an ever-changing system works. He’s been writing from childhood, and had the appropriate horrible relationships that damaged his self-confidence for years. Then out of nowhere Curiosity Quills Press demanded he give them his books, and here he is.

As for what he writes, Richard loves children and the gothic aesthetic. Most everything he writes will involve one or the other, and occasionally both. His fantasy is heavily influenced by folk tales, fairy tales, and mythology, and he likes to make the old new again. In particular, he loves to pull his readers into strange characters with strange lives, and his heroes are rarely heroic.

Curiosity Quills Press (CQ) is a small hybrid publishing company specializing in genre fiction of the highest quality. With 150+ titles in our catalog already and approximately 6 new books coming out each month, there’s never a dull moment at CQ. We work with major retailers such as Amazon, Barnes & Noble, and Audible to ensure that you, the reader, can find whatever you are looking for at your convenience.

Founded in 2011 by Eugene Teplitsky and Lisa Gus, CQ was initially a resource portal for writing and publishing, created in an effort to help writers, like themselves, survive the publishing industry. After rapid success, CQ morphed into publishing press that over time has solidified its share in the market. Now we spend our days searching for the next great escape!