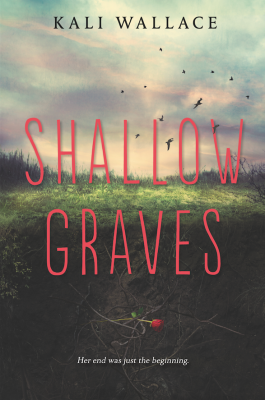 Synopsis:
For fans of Holly Black and Nova Ren Suma, a gripping, hauntingly atmospheric novel about murder, revenge, and a world where monsters—human and otherwise—lurk at the fringes.
When seventeen-year-old Breezy Lin wakes up in a shallow grave one year after her death, she doesn’t remember who killed her or why. All she knows is that she’s somehow conscious—and not only that, she’s able to sense who around her is hiding a murderous past. In life, Breezy was always drawn to the elegance of the universe and the mystery of the stars. Now she must set out to find answers and discover what is to become of her in the gritty, dangerous world to which she now belongs—where killers hide in plain sight and a sinister cult is hunting for strange creatures like her. What she finds is at once empowering, redemptive, and dangerous.
Tense, complex, and wholly engaging, Shallow Graves is a stunning first novel from Kali Wallace.

I thought that this book was a particularly entertaining one to read. While some of the flashbacks were a bit confusing, I found Breezy to be an interesting character who came across as really well-developed.

I thought it was interesting to see that Breezy could sense the people who had killed others. I was confused for quite a long time in the book as I tried to figure out exactly where she was trying to go. For a lot of the book, it just seemed like she was going aimlessly from place to place.

I liked being able to see Breezy interacting with and learning more about the other creatures like her, but I did lose track of all of the characters who were in the house along with Violet. I would have liked some more details about Violet… and I did feel like there was very little foreshadowing, given that Breezy’s flashback about her occurred right after she met her in the narrative.

I thought it was good that, through the book, Breezy was trying to find answers about what she was and how she’d been brought back. I did, however, feel that by the end of the book, I still had more questions than answers.

I especially liked seeing Jake and Zeke in this book. I would have liked to see a bit more of them being brothers, but what I did see of their relationship was cute. I really disliked Rain, though. While there were occasions I might have felt sorry for her, her actions quickly made me lose any sympathy for her.

There were a lot of good elements of tension and mystery in this book… but also a lot of dark moments, with potentially triggering material. I thought it was easy to see the differences between Breezy before and after what had happened to her and I felt a lot of sympathy for what she’d lost.

I would like to see a sequel to this book in the future. I’d enjoy the chance to see Breezy trying to live… maybe even attempting to fulfill her dreams. And, of course, there are plenty of other characters I’d like to see more of. 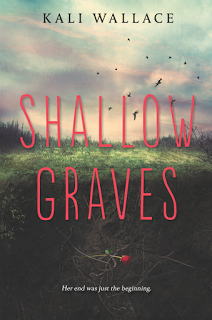 Follow the Shallow Graves by Kali Wallace Blog Tour and don’t miss anything! Click on the banner to see the tour schedule.

Kali Wallace studied geology and geophysics before she decided she enjoyed inventing imaginary worlds as much as she liked researching the real one. Her short fiction has appeared in Clarkesworld, F&SF, Asimov’s, Lightspeed Magazine, and Tor.com. Her first novel will be published by Katherine Tegen Books in 2016. She lives in southern California. 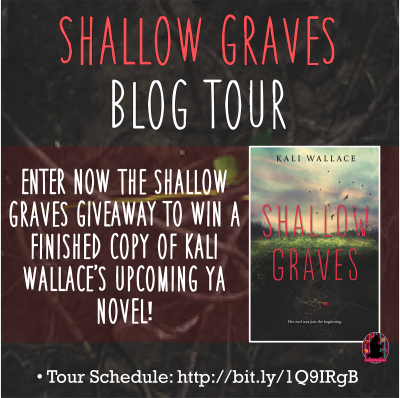