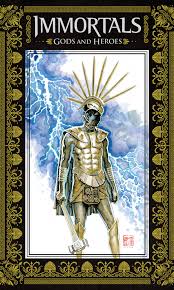 Having seen and thoroughly enjoyed the movie Immortals, I was excited when I originally realised there were comic tie-ins for the movie… so I bought it and although it has taken me a while to get to it, I did really enjoy reading each of these comics.

It was interesting to see the versions of the myths and how the characters were depicted. I did notice a vast difference in some of the artwork… and the final story was virtually no dialogue, but I thought it was still really effective.

It was intriguing to see, in the first story, that Zeus was raised by humans. I liked the images of Rhea and how the actions of her husband affected her desire to save Zeus… and I did think it was good that Zeus’ compassion showed as a thread through each of the stories.

I thought it was interesting to see the origin of the Epirus Bow… though I did feel a lot of sympathy for the cyclops and how Ares deceived him. I wasn’t sure if the story directly following that one was meant to be an alternate… or if it was continuing with the deception; but I thought it demonstrated Ares’ arrogance and thirst for war really well, despite the fact that he didn’t seem to have a lot of depth outside of that.

I did enjoy seeing Zeus and Poseidon interacting together when they went to ask Hades for aid. I thought that Hades’ favour was a good one… and I did like the final scene in that story.

Prometheus was an awful person in this anthology and I cringed when I saw the images of what he did to people. I thought it was a good demonstration of why the Olympians and the Titans ended up at war with each other.

I thought it was sad to see the story where Zeus could see the potential path humans could have taken and considered wiping them out… but he cared about them and could see good in them. It was interesting to see that being the main reason behind the law not to interfere with humans as gods.

I disliked Hyperion just as much in this anthology, even though I did feel some empathy for him. I just thought he was an awful person.

I liked the fact that a lot of the artwork did have the feel of the movie. I was disappointed to reach the end of the anthology, because I enjoyed reading it so much.