Zainab T. Khan is the author of Sanctuary: 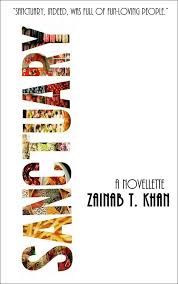 1) What originally inspired you to get into writing?

It was once upon a time, the tv show. It doesnt even make sense now when i think back about it. i remember, as i was watching the show I wanted to write a story about a girl who gets her happy ending. And then things happened. Two drafts later, one finished and one lost, I finally wrote one that didn’t seem kiddish to me. So i published it in February 2015. It just went from that.

2) Where did the idea for Sanctuary come from?

That’s easy. I’ve always wanted to write about a place where no one is being discriminated on any basis, whatsoever. Thus, Sanctuary came into existence.

Able to relate to? Probably not. As for liking and disliking, I like all of them. I still haven’t reached up to a stage where I can discriminate between my own characters. It’s just not possible, at least now.

4) Were there any scenes in particular that were particularly challenging or easy to write?

I’m thinking real hard right now, trying to come up with an answer to your question. As far as I can remember, not really. I had to do a lot of research though. But it was really interesting. I guess the scenes between Adelaide and Kivanc were the easiest to write. Their relationship just somehow made me comfortable writing it, alog with Ruelle and Raina, though with them there was still some things with which I needed to be very careful.
The challenging scenes were the ones in which I had to write about the festivals. I’ve never been to any of the festivals mentioned in Sanctuary, so the scenes are based on my google research and imagination. Lots and lots of imagination.

5) Are there any particular authors or books that have inspired you?

Inspired me in writing? Meg Cabot. Growing up, I’ve read a number of Meg Cabot books. And my second draft was a teeny tiny bit inspired by her Mediator series (if you haven’t read them, you’re missing out, really.)

6) Do you have any advice/pearls of wisdom for budding writers?