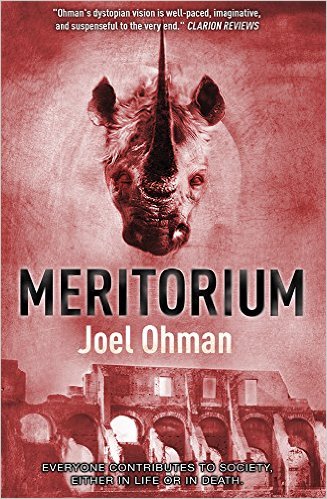 Charley has escaped from Meritropolis…

but in his quest to take down the System that has taken his brother from him, he must go through Meritorium, a city where gladiatorial games of life or death combat are waged between High Scores and Low Scores, man and beast.

Charley and Sandy must face man-eating plants, religious zealots, slave traders, and the ever present mutant animal combinations that roam a dystopian Coliseum presided over by Emperor Titus, the one man standing between Charley and the answers he seeks. Man is not an animal, but if they are to make it through Meritorium, will they even be able to tell the difference?

The lines between man and beast, friend and foe, will blur in Meritorium, the riveting sequel to the bestselling Meritropolis.

I haven’t read the first book in this series, but I did find this one easy to follow and understand. It was interesting to see a society where everyone was given scores, though I would have liked to know a few more details about how the scoring worked… and what criteria was used to give the different characters their scores.

I would have liked to see more of the individual characters, even though the ones I did see were interesting enough. I found Sven a more interesting character than Charley… though I also would have liked to see more of Orson. I wasn’t quite sure if he was meant to be a good person or a bad one… but he was definitely intriguing and someone I felt was really well-balanced.

Even though Charley wasn’t my favourite character, I did find him a believable one and it was good to see that he had a goal to work towards. While I did think he had the right idea about equality, I don’t think he did much to actually show that… not until towards the end of the book.

I didn’t like Marta’s character at all… and she seemed to forget about the people who were part of her group after they reached the town. At the same time, I did think that she was an interesting character. There was a lot of potential in her character that I was a bit disappointed not to see more of.

I liked the opportunity to see the different types of animals there were in the world and it was good to see the illustrations in the book to get a better idea of what they looked like. I really liked Shooey… it was cool to see him turn up again towards the end.

Although there was a lot of action in this book and a lot of people who died, it was hard to care about many of the nameless, faceless characters… though it was interesting to see the similarities the world had to that of Ancient Rome, if somewhat difficult to read in parts.

In the future, I would like to read the first book in the series… and also the next book/s. It would be good to see more of the world and the characters involved.

Charley crouched, motionless, willing himself not to blink. A bead of sweat bubbled across his eyebrow and clung to his eyelash: a warm and salty droplet hanging like a swollen piece of fruit, overripe and ready to fall. He stared straight ahead, eyes wide open; to move now would be disastrous.

The thing stopped, ears twitching. Charley willed himself not to make a sound, but was suddenly aware of the faint scent of his own sweat; he wondered whether the creature could smell it, too. He had been following it for half of the afternoon. By this point, the thing should have had ample opportunity to scent him, given Charley’s quite rudimentary tracking prowess, but it hadn’t yet. Each time Charley drew close enough to chance a shot with his bow—and he knew he would only have just one shot—the thing capered off, leading Charley even deeper into the brush.

Charley found it maddening how fast its four legs could move; the bushy forelegs of pillowy grey-white fur made it seem as immobile, docile, and non-threatening as a sheep. But, as Grigor had instructed earlier, to underestimate a llamabill was to invite disaster.

Charley reached over his head, slowly, and withdrew an arrow from his sheath.

The profile of the llamabill shifted slightly, revealing great big haunches of what Charley hoped would be today’s dinner, as well as the severe-looking face of a shoebill bird. Its body, with the exception of the incongruent webbed feet and feathery wings, was almost entirely reminiscent of a llama: big, wooly, and slightly ridiculous. The head, however, was no laughing matter. The wide shoe-shaped bill could decapitate a fully-grown man with one well-placed chomp. A standard shoebill stork is not a bird to be trifled with, at three-feet tall and a weight of ten pounds, let alone when it’s six-feet tall and a weight of 400 pounds with the body of an agile llama.

Charley notched the arrow and pulled back slowly.

He hated to do it, really he did. He didn’t enjoy the killing, but the truth of the matter was quite simple: they needed food, badly.

Charley steeled his resolve and dipped his head slightly downwards to his right shoulder while closing his left eye. He sighted in on the creature, aiming for the spot where its long wooly neck met its substantially muscled left shoulder. He reconsidered, tipping his bead slightly higher to avoid the feathery wing that jutted incongruently from the llamabill’s great side.

The muscles in Charley’s forearms stood out like corded bands. He held the bow drawn back all the way without wavering. He inhaled through his nose, and then expelled the air slowly through pursed lips, attempting to quiet his beating heart. He would release the arrow upon a full exhale, and in between heartbeats, just as Grigor had trained him.

It was as good of a shot as he would ever get. Charley didn’t really have to do anything, now. He just needed to relax the three fingers of his string hand, and the llamabill, still standing motionless, would be dead, motionless forever.

A glimmer of uncertainty, a pang of conscience—and for what? he wondered—it was just an animal.

The llamabill turned to look directly at him, its prehistoric eyes glinting sharply as they focused in on Charley.

A cold shiver crept up Charley’s spine. He had waited too long, and he knew it. The droplet of sweat plummeted from his eyelash, and Charley released the arrow. It went wild left, and the creature went wild right—directly at Charley.

The llamabill opened its enormous bill and screamed a challenge. For a moment, it looked like an anachronism to even more savage times, a winged dinosaur on the rampage.

Charley did the normal human thing first, and then the normal trained hunter thing second. He froze. Then he ran.