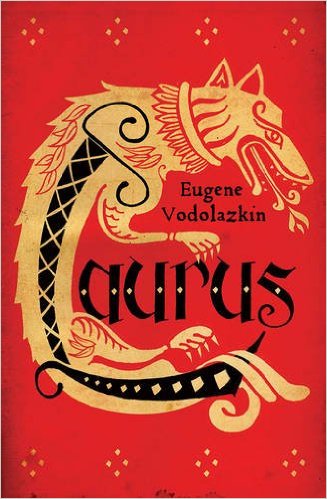 I have to be honest… I kind of struggled with this book. While I thought the concept was a really intriguing one, I found it very difficult to follow many of the events. They didn’t really feel real to me and I found it hard to engage with the main character who was the main focus of this book.

While I thought it was an interesting idea for Laurus to be focused on trying to live his life for Ustina’s sake, I didn’t really have the opportunity to get behind their relationship. The first time they’re together, there seems to be nothing but attraction… and nothing is revealed about Ustina and what her personality is; only when she becomes pregnant. In many ways, she seemed to be a figment of Laurus’ imagination and the reactions of those around him were really hard to follow.

The idea of the holy fools was one I found really confusing, such as the whole idea of the territory. I felt a lot of sympathy for Karp, considering his apparent inability to communicate. It was also interesting to see how Laurus degenerated into madness and eventually pulled himself back out again… and how the different names he was given related to his personality at the time and the different stages of his journey.

It was interesting to see some of Laurus’ interactions with the other characters. I was confused by several scenes that took place in the future, since most of them didn’t seem to have any relevance to the scenes that had preceded them. And even though I had read the translator’s note, I still found the use of modern language to be really jarring and unnecessary… as well as the times when present tense was used instead of past.

One of the things I did find good was the references made to the mythological creatures apparently discovered in other countries. It was amusing, in some ways, to see the almost wonder-filled way Laurus listened to these ‘tall tales’. I also thought it was interesting to see the way the story almost seemed to come round full service.

I probably wouldn’t read this book again, but once I got into it, there were some good elements, despite what I’ve mentioned above.